Going to the birds 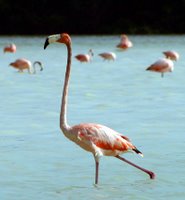 Flamingos and tourists alike flock to the Celestun Bird Sanctuary

How can you go wrong in a city full of music, hammocks, and jewel-encrusted bugs?

Merida, the capital of the state of Yucatan, is the peninsula's centre of commerce and a stopover for many travelers on their way to points such as Cancun, Chichen Itza, and the Ruta Puuc. It is also a destination in its own right, packed with indigenous history and colonial architecture.

The Zocalo in particular entices visitors and residents with its evening music and dance events, and the streets surrounding it are where most of the sights and shops - containing the ubiquitous hammocks and not-uncommon live bug jewelry - are located.

But Merida, however lovely, is hot. Very hot. With temparatures during our stay of over 40 degrees Celsius, my traveling companions and I fled the city and it sizzling streets in search of cooler sea air, which we gratefully embraced at the Celestun Bird Sanctuary, an hour and a half drive from Merida on the Gulf of Mexico.

There are egrets, cormorants, anhingas, pelicans, herons and albatrosses among the 300 known species to be spotted, but most people flock to Celestun for a glimpse of thousands of Caribbean flamingos.

The most popular way to explore Celestun is by renting a boat, which will take visitors to the flamingo lagoon and around various islands hosting nests of birds and pools of fish, as well as through shady mangrove tunnels.

One boat seats from four to eight people, depending on how shallow the water is - if there are too many people on board, the boat will be grounded near the many bird-filled islands.

Celstun was declared a Special Biosphere Reserve by the federal government in 1989, offering some protection for the flamingos' fragile environment. With too much disturbance, the birds' feeding patters are affected and they may face death or the relocation of their colony.

Our boat driver, Jesus, kept a respectful distance from the wading birds, but photo opportunities were abundant as they waded, ran, flapped and flew at their own leisure. One of their most impressive party tricks is flapping their wings just enough to walk on water. But with an average wingspan of 1 1/2 meters and a line of black feathers only visible in flight, it is worth waiting to see one fully take off. Elegant, thin birds whose body mass seems to consist entirely of wings, the flamingos in air are pink arrows.

Jesus also trawled for the tiny pink worms the flamingos eat which, along with shrimp, give them their distinctive colour. Until they reach maturity, however, flamingos are a greyish colour - a state they would revert to if their diet lacked these foods rich in carotenes.

Though catching a glimpse of them is unlikely, Celestun also provides sanctuary to endangered mammal species such as ocelots, jaguars and spider monkeys, as well as to sea turtles and crocodiles. Jesus tells us that when the waters rise, the flamingos must sleep on the forested shore, leaving them vulnerable to attack from the crocodiles. Otherwise, he ways, they sleep on the spits of sand that rise from the lagoon.

Bird-watching can be a hungry sport, but seaside restaurants selling specialties filete mojo de ajo, ceviche and shrimp or oyster cocktails dot the shores around the town of Celestun. Many have showers and change rooms for that obligatory post-lunch dip in the Gulf.

For a glimpse of Mexico's breathtaking natural diversity and an escape from the heat and bustle of the nearby Yucatecan tourist meccas, Celestun offers an idyllic daytrip from Merida.