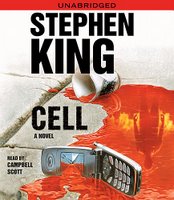 I am not Stephen King's target audience. I have a hard time describing my reading tastes without being too vague - contemporary fiction - or too pretentious - literary fiction - and neither encompasses the spectrum of what I choose to read, which is often not contemporary, literary, or fiction. But in no possible description of my reading tastes do the words horror or suspense appear.

I would not have listened to the audiobook of King's Cell if I hadn't committed to writing a review. I would have stopped listening after the initial burst of carnage if it weren't for that commitment. But there's a reason Stephen King is so successful at what he does: he's creepily good at it. Once I got past the early gore, I was sucked into the story and spit out only after the final sentence.

Cell has a faintly ridiculous premise, but the execution is unridiculable (unlike my penchant for making up words). It's the cellularless King's demonization of the technology, and it's almost laughable except it's truly creepy. With folksy and unique descriptions of scenes and objects, a light touch of occasional humour, and simple but telling observations about his characters, King doesn't rely solely on plot. But it's the plot that builds momentum, as characters and complications are introduced along the way that we know bode ill for our hero and the world as we know it, but we're not quite sure how or why.

When Cell opens, life is sweet for that everyday hero, Clayton Riddell. In Boston for a business meeting, he has just signed a deal to illustrate comic books, which he hopes will prove to his estranged wife that he's not a feckless dreamer. After buying a present for her and heading off to get something for his son, he suddenly notices the people around him are behaving ... unusually. A man bites the ear off a dog, a woman tears out another's jugular, one bashes herself into a pole, some throw themselves off buildings.

Clay pieces together what happened - those who were using cell phones at that moment went viciously crazy. Those who wanted to find out what was happening or warn their loved ones picked up their cells and became one of the phone crazies. Only those like Clay, who didn't own a cell, or who didn't have one with them, or who figured out the cause and effect before pressing send, remained "normies."

Clay's driving force - and therefore the reader's to a large extent - is his quest to find his son, Johnny G, in Maine. He meets up with other normies along the way, forming a pseudofamily with Tom, a gay man whose life Clay saves, and Alice, a 15-year-old girl who had to fight off her own crazed mother. The book's gore eases off into suspense rather than horror as the phone crazies begin to evolve, developing a collective mind and acting like zombies without the bother of dying - the not-dead undead.

The three wanderers find crudely painted signs saying "KASHWAK=NO-FO" - a challenge to understand in the audiobook version, where I first assumed the line was "no foe," then "no pho," then had to look it up online to discover the correct (I hope) spelling. The confusion wasn't out of place, however, since Clay and his gang know the signs mean that Kashwak is an area in Maine where there is no cell phone coverage, and that the normies think that means it's a safe haven. But they also believe that the phone crazies are spreading the message, which means there might be foes in the no phone zone after all.

Campbell Scott (Roger Dodger, Big Night) reads this audiobook, and his soothing voice is a nice counterpoint to the suspense of the plot. The book is told mostly from Clay's point of view, but the occasional voice changes are handled deftly. There are, however, a few places towards the end where it sounds like another reader's voice is spliced in for the odd phrase, making me curious about the process of recording and producing an audiobook, but not distracting too much from the listening experience.

Cell is available unabridged on CD, cassettes, or as an eAudio download from Simon and Schuster's audiobook website, SimonSays, where you can also hear a clip and listen to a podcast about the book.
Posted by Diane Kristine Wild at 11:48 p.m.