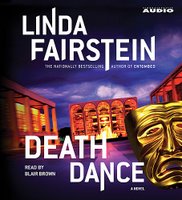 Death Dance is the latest in a series of Alexandra Cooper mystery novels, written by Linda Fairstein, a former New York City prosecutor. With this book, I'm stepping blind into the series after several books that presumably set up the personalities of Manhattan Assistant District Attorney Cooper and her colleagues, New York Police Department cops Mike Chapman and Mercer Wallace.

At least, I hope they were set up in the earlier novels, because there's little evidence of personality in this one. We're expected to care about these characters and understand their bond with each other instantly, with no attempt to demonstrate or develop character. The resulting blandness fits well with the generic whodunnit plot that is, nonetheless, place in an interesting scenario and filled with careful detail about police procedure and the New York theatre scene.

Cooper, an erstwhile dancer herself, is brought in to investigate the murder of prima ballerina Natalya Galinova, who disappeared during a performance at the Lincoln Center's Metropolitan Opera House. Along to interrogate the many suspects, though sometimes with less regard for rules of procedure than the by-the-books Cooper, are Chapman, recovering from the death of his fiancee a few months earlier, and Wallace.

In addition, Cooper investigates the case of a doctor who drugged and raped two visiting Canadian students, then fled to his native Turkey. Though this subplot is the only one to show us prosecutor Cooper in action, though not faring well in front of a judge, it never really goes anywhere, connects to the main story, or evolves into anything other than an overly familiar story in this world of CSIs and Law and Orders.

The book doesn't open on its strongest hook, the world of incestuous theatrical intrigue, it opens with this date-rape case, which is then dropped for extended periods. The audiobook version is abridged, which might explain how disconnected the B plot seems, though I can't say I'm sorry to have missed out on more of it. The pacing and focus of the book would have been tighter if it had been dropped completely, or at least integrated into the main plot better.

The book relies on straight exposition and little deduction. The suspects are all conveniently chatty, and the final resolution comes from explanation by those involved rather than clever detective work. The writing never really sparkles, and Fairstein has a tendency to overwrite, presumably to give the reader clear signposts to cut the confusion of so many suspects, but that leads to never saying anything once when it can be said twice or more, and to have awkward dialogue exchanges even where there's little possibility of confusion:

"You know that glove?"
"You mean the one with Burk's DNA?"

The writing does little to distinguish the dialogue of the different characters, and though audiobook reader Blair Brown handles the many characters with distinctive voices, her many versions of a hardboiled New York accent did start to grate after a while.

Fairstein clearly explains the grand jury process and the different DNA tests available, for example, with eye of an expert. She also introduces detail on topics as diverse as Shriners and theatre costumes that lend some interest to the proceedings. It sometimes feels unnecessary and even a little pedantic, but that detail does set her writing apart.

Some mystery fans looking for an easily digestible read will likely be satisfied with this familiar formula and straightforward prose, especially combined with the peek backstage at the theatre and the world of crime investigation, but it would have been far more engaging with a more clever plot and more creative writing style.

Death Dance is available on CD, cassettes, or as an eAudio download from Simon and Schuster's audiobook website, SimonSays, where you can also hear a clip as read by Blair Brown and listen to a podcast about the book.
Posted by Diane Kristine Wild at 12:58 p.m.