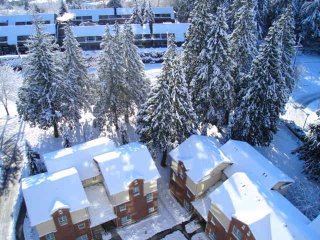 When I lived in Alberta, we used to make fun of those wimps on the West coast who couldn't handle a little snow. We'd see the images of slipping and crashing cars, the bewildered pedestrians, and mock them. The entire Vancouver area would shut down after an amount of snow that would make Edmontonians and Calgarians think spring had arrived.

Now that I live in the Vancouver area, I see the other side. Albertans have parkas and boots and toques. The non-skiers in Vancouver think an umbrella is snow gear. Albertans have had far more practice driving in the snow, and they have snow tires. Edmonton and Calgary also have adequate snow removal budgets and equipment. Vancouver's snow removal equipment is called the sun and the rain, and the district has to crack open the piggy bank to get gas for the grader.

I may be from Alberta, I may have earned my driving license in Alberta, but I didn't actually drive in Alberta. I'm not as unconfident about my driving as I sometimes sound, but I know my limitations. I also know the limitations of Vancouver drivers. So I made the decision to be a wimp and work from home Monday and Tuesday, and left the office at the first sign of flakes today. It helped give me uninterrupted time in order to put out a special edition of our newsletter with winter safety tips. Like, stay home if you can.

One of my coworkers said that in this weather, you can tell the drivers to avoid because they're the ones behind the wheel with white knuckles and wide eyes, like deer in the headlights. "That's me! I'm the white-knuckled deer in your headlights!" I said before I headed home for the scariest drive I've had since my crazy driving instructor took me on the Deerfoot Freeway in Calgary two minutes into my first lesson ever.

So before you mock me for not wanting to venture out in two inches of snow, remember that there's black ice under it and crazy drivers on top of it. I'd rather not be one of them.