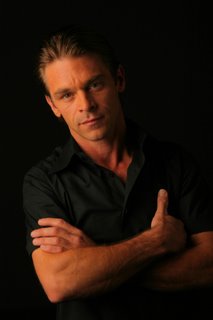 A lot of pieces to the detailed puzzle come together in the "Love and War" episode of CBC's Intelligence.

Mary Spalding (Klea Scott) gets some answers about who might have been responsible for the death of Lee the mole, whose turning she celebrated for about two minutes before he was shot for being a rat. From mole to rat to a body shoved in a washing machine carton - poor guy. But as Martin the polite pig comforts Mary, "it's the cost of playing, isn't it?"

Spalding learns that someone in the Hong Kong police called the guy who killed Lee shortly before the shooting, and by the end of the episode, she discovers that CSIS slimeball Roger Deakins was the one who placed that call. Or at least the call was placed from Deakins' phone, but my suspicions about Mary's deputy slimeball Ted are somewhat allayed by the fact that I'd hope it would be very difficult for a CSIS office to be broken into, or cell phone stolen.

In any case, Christmas comes early for Ted, who thinks Mary's chances of the CSIS promotion are kaput, and who has been hoping - and likely plotting - Deakins' downfall, too.

The penny also dropped when it comes to something Ian Tracey said during our interview several weeks ago, something that didn't make it into the final article. I had asked what Reardon's biggest vulnerability is, and hesitating a bit because he didn't want to reveal details that would spoil episodes that hadn't yet aired, he said: "He's not walking the fence, but reaching a crossroads - are you in or are you out. It's a hard thing to get out of. You can't just walk away. His vulnerability is probably his uncertainty for the future." At the time, the reason for that answer wasn't apparent onscreen, but suddenly it's crystal clear.

Jimmy has already told Mary that he plans to go legit in five years, but we've seen no evidence that he's winding down, and much evidence that he's widening his business on more and more fronts. Yet as Ronnie points out, Jimmy needs to decide if he's going to retire so his successors can carry on with a parceled-off business, or decide "what we're willing to fight for."

"I feel an anthem coming on," says Mike, who besides a hideous cut hidden under his bandages, seems none the worse for the throat slashing of last episode - except for concocting the most disgusting meal out of blended fried eggs and tomato juice, which turned my stomach far more than the blood from that slashing and from Lee's shooting combined.

In fact, the attack seems to have increased his brain power a little. Jimmy refuses to enter into a war with the bikers without proof that they were behind Mike's attack. He's apparently an advocate for empirical gangsterism. Mike agrees with Ronnie that they need to fight for their empires, but backs his brother up: "I want to bury the right guy."

Before I get too full of praise for screw up Mike, Jimmy'd better hope he's just inept and not a traitor. It seems Mike helped set up the meeting between his brother and a drug distributor who is actually the DEA operator we've heard so much about. Jimmy's suspicions seem to have been raised, however, since he instructs his man Bob to get the guy's car followed.

Everyone's suspicions are confirmed when Jimmy meets Mary, who wants him to help newly turned rat Randy Bingham to set up another gun shipment. In exchange, she tells him that the bikers were behind the attack on Mike. Assuming Reardon trusts Spalding - and while we know it's true, her tip that the Vietnamese were behind the attempted hit on Jimmy and Ronnie didn't pan out - he now has his proof that the bikers have declared war behind Jimmy's back, despite scary biker boss Dante having agreed to Jimmy's Christmas-sounding plea for peace and prosperity.

With war declared, whether Jimmy likes it or not, the threat of violence hangs over the Reardon empire more than ever. Vic, the vending machine entrepreneur who's been fronting Jimmy's ATMs, begs to be let off the hook after the bikers come after him, and he fears for his family. Before that, Jimmy's unstable ex-wife Francine had come to him asking him to consider sending their daughter Stella away to school. He objects, causing her to demand whether he can guarantee Stella's safety. The woman has a good point. Which must mean she's got some other agenda.

The episode ends with Jimmy and Mary proving what a bad day it'd been for them. Jimmy finally plans his attack, a retaliation on the bikers with the help of his new Vietnamese connections. How bad has Mary's day been? She flashes her badge in order to get into a closed liquor store. Funny, but probably not smart.

The next episode of Intelligence airs Tuesday, Nov. 28 at 9 p.m. on CBC.