Don't make me get all cranky-ass

With an upcoming birthday, I'm reminded of so many ways in which I'm turning into a crotchety grandmother. One is my crankiness over poor customer service. Get me started and I'll rant about how the world's going to hell in a handbasket, and no one takes pride in their work anymore, and this younger generation just doesn't know the meaning of work, and blah blah blah. 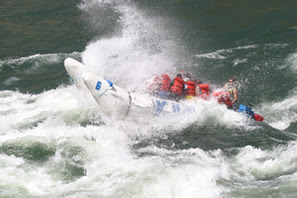 But speaking of what's the world coming to ... I swear it crossed my mind for only a nanosecond, but the fleeting thought to post a picture of my butt did actually register up there. Not for anyone's titillation mind you - seriously, no one wants to see that - but out of astonishment that this weekend's power rafting, while not as crazy scary as the kayaking I did last year, has left more of a mark. Several large purple marks, in fact. Why yes, the raft was inflatable rubber, which generally speaking shouldn't leave a bruise, but those wooden joints sure seem to be everywhere when you're bouncing up and down and hanging on for your life in the middle of the rapids.

Sleeping on the ground isn't my favourite activity. Sleeping on the ground next to active train tracks is now on my list of least favourite activities. But the employees at the rafting resort (they use the term resort loosely) were amazing. We were a group of 13 people, the United Nations gang of friends from Mexico, Peru, Croatia, France, and boring old Canada (though we all live in Vancouver). Not only did the Spanish-speaking waitress make sure she helped out with our table at dinner and breakfast, and direct the tips to our actual waitress, who we never saw, but the other employees were equally friendly in English too. Plus, you know, we all survived the scary trip, so they're my favourite people now. The place we went kayaking last year was fine, but this place stood out for the nicer facilities and especially for the great service.

On the other hand, in my summer of mini vacations, I flew Air Canada the weekend before, and I have a new slogan for them. You know how Delta's is "We love to fly and it shows?" Air Canada's has got to be "We hate our jobs and it shows." I bet their employee recognition program celebrates the surliest flight attendants and ticketing people.

I'm booking flights for my upcoming Toronto-Wisconsin trip, and I'm trying to avoid Air Canada at all costs. Well, not at all costs. I've had many bad experiences with Air Canada over the years, and I always try to avoid them, but ... I got a great deal on my last trip. I have my principles, but I'll give them up to the lowest bidder.

I managed to avoid Air Canada for the Wisconsin part - and I did have a choice there - but if WestJet can't seduce me for the Toronto part, I'll reluctantly go with price over customer service. But I reserve the right to whine about Air Canada later ... and to want to show them a picture of my ass, for real.