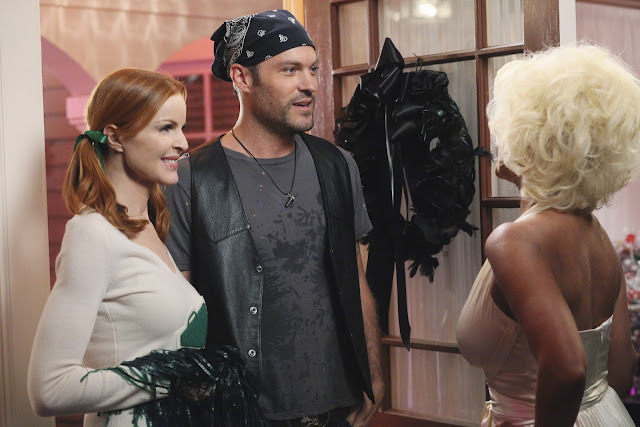 Tonight I think you should watch Desperate Housewives, even if, like me, it's not a show you regularly watch. Who can resist a Halloween episode ("Excited and Scared") airing on actual Halloween Day?

But the real reason I'll watch and think you should too is that it's the directing debut of the talented and witty Jeff Greenstein, who also wrote it. (Oh and he recorded a commentary track that'll be available on abc.com on Monday, too, though it'll likely be geoblocked in Canada as usual.)

He apparently moved to LA with the dream of becoming a director, but took a not-too-shabby 25-year digression into writing for shows such as Dream On, Friends, Will & Grace and Parenthood, plus developing his own, including one he's working on now with novelist Jennifer Weiner.

We barely know each other, but I care because we have an odd history that I get a kick out of and that's given me an appreciation for his intelligence, humour and talent. And it feels good to see good people succeed.

We've never exactly met - though you could say that I've met him but he hasn't met me. I've interviewed him a couple of times since and we've kept in touch, but our paths first crossed at the Banff TV Fest a few years ago. I was in the audience for a session where he was to be sole speaker, except he brought BBC producer Jon Plowman to help. I wrote a very brief blog post at the time saying that Plowman didn't need to help much because Greenstein sure can talk, so luckily he was funny and informative.

Almost 2 weeks later, I started writing a full article for Blogcritics that included Greenstein's session along with House writer David Hoselton's. Literally as I was finishing the final edits, an email alert notified me that I had a message from a Jeff Greenstein with the subject line "I sure can talk." It took my confused brain a few moments to sort out the fact that the man I had been writing about for the past hour - a man I didn't think knew I existed - was writing to me at the exact same time. I know in my head that a world without coincidences would be freaky, and yet the coincidence freaked me out a little.

It was a good-humoured email that saw the genuine if jokey compliment in my original assessment. I don't regret saying it, either: he really can talk. He also sure can write, and now I bet I'll be saying he sure can direct. Let's find out.
Posted by Diane Kristine Wild at 8:37 a.m.

I hope to write more substantial posts about the incredible trip to Egypt, but for now here's an annotated and illustrated compilation of tweets I wrote while it was happening. Unfortunately pictures aren't allowed in the Egyptian Museum (so no pics of King Tut's treasures or the mummies) or in the Valley of the Kings (so no pics of the tombs).

It's Egypt Eve! I'm as excited as a kid at Christmas and as terrified as an adult about to fly across the world in a tin can.


Woke up, checked Twitter, 1/2 expected news that'd cancel today's Egypt trip. RIP Tony Curtis, loved you, but thx for not being a volcano.


[A reference to the fact that our original trip was cancelled
by the Icelandic volcano, news I read first on Twitter.]
Heading to the airport for Egypt! Well, Edmonton for now, but as Teresa & I proved last time - same thing


Napping at the Edmonton airport, hair askew, bags piled around. Only thing distinguishing me from a hobo is Twitter.

Teresa's here! We're through security & at the gate! Reunion Trip 2: Actually Getting On The Plane is underway.


In Cairo, exhausted but exhilarated. Egypt doesn't seem very similar to Edmonton after all, though. Huh.


Pyramids, sphinx, King Tut's treasures - so surreal to see in person. Flying to Aswan now to make friends with a camel.

Up at 2:45am taking police convoy through desert to Abu Simbel. Teresa's dream destination but too sick to come. Other girl puking on bus.


Perfect midpoint to trip, sailing down Nile in cooling breeze, doing nothing but watch camels, donkeys, cows, trees, sand, reeds as we pass.


Also? No one is puking or dropping from heat exhaustion. We're saving that for Luxor tomorrow. Sleeping on the felucca deck tonight.

Docked for night, Teresa seasick so sat on Nile bank. Lovely man gave me Nubian name of Unati (moon) and promised to build house for me next ... [tweet cut off]

Last tweet was supposed to say lovely Nubian man was going to build me a house next to his other wife's. It killed the romance a little.


3 temples today, all spectacular. Karnak built over period of 2000 yrs. I can't commit to what to do next weekend.


Shoutout to Sem Sem, our Egyptologist guide. By the time I'm home I'll have forgotten astonishing amount about ancient Egypt.


Day began at 4am w/balloon over Luxor, then donkeys to Hatshepsut Temple, then Valley of the Kings. Last day in Egypt tomorrow. Sniff.


Last day in Egypt. Said goodbye to tour leader. Now must make all decisions on our own. So Twitter, where should we go for lunch in Cairo?


Such an incredible couple of weeks I've had in Egypt and LA. Now back to reality. Sigh. Gotta plan my next adventure to anticipate.


[A hint? Next summer I'm going to the country that
ruined the first attempt at an Egyptian vacation.]
Posted by Diane Kristine Wild at 3:14 p.m.