Waddling from Oregon to Ely, Nevada 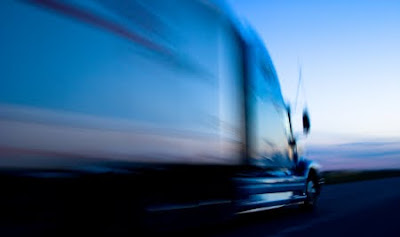 Las Vegas is warm, right? I ask because my experience of Nevada so far is cold, freakishly windy, and occasionally snowy, but I'm sure by the time I descend from these altitudes I'll have defrosted.

As I figured from the fact that no one had suggestions of things to do along the way, this route is scenic but not tempting me to make detours or frequent photo stops. I'm happy about that because I don't have time to dawdle in this part of the road trip; I made it a road trip because I was craving the alone time, trapped alone with my thoughts and music, but maybe more importantly, because I needed the car with me for phase two of the post-employment vacation.

I hit three states in one day. The highlight of the brief Oregon segment was refuelling at a gas station next to the Redneck Cafe in a middle of nowhere town. The grizzled station attendant, on seeing my licence plates, exclaimed: "You're a hoser!" and asked if Bob and Doug MacKenzie were still around. (I said no before remembering the recent cartoon - bad TV, eh webmaster!) He also admired my little 5 year old Toyota Echo before asking if it had been recalled. "Not yet," I said. "I feel snubbed." (He laughed. I'm sure it was a pity laugh.)

I plowed through Idaho (not literally). (Get it? That's a potato joke. Not even a pity laugh?) I think the "potato ice cream" signs made me think this wasn't a place I wanted to stop.

Good thing I didn't want to stop for the last few hours because there was nowhere to stop. I'd seen Ely, Nevada on the map and on the signs and figured it would be a decent place to stay the night, big enough to have a selection of hotels, situated so I'd be poised to get to Vegas by early afternoon. Good choice, since it was the only choice. The snow and the sun started falling, cell service disappeared, and I did what I often do when driving at night on unfamiliar, semi-deserted highways: I followed a trucker. I kept a respectful distance, of course, but it's my security blanket, letting me feel like there's someone who might notice if my car turned into a fireball behind him.

I don't know if this is a normal thing to do, but I do know that someone else seemed to have the same idea, or at least I imagine so - a pickup truck who had passed me and the semi let us both pass when the snow started falling in the cell-silent darkness, and we travelled as a convoy for over an hour. Even when we got to civilization just before Ely, when I could have easily passed him and didn't need the security anymore, I chose to stick to the speed limit and to my mama duck and, I've gotta be honest, I felt a little betrayed that the pickup passed us by.

I did fly by him once we got to Ely, in case by some freakish coincidence I ended up following him to a hotel. There's a fine line between realizing someone's following you and feeling stalked.

I was going to try to post daily but I can't promise myself that. After all, I'll be in Vegas having fun with friends, not crashing in a hotel alone at the end of a day trapped alone with my (clearly very random and tired) thoughts. Plus I've heard what happens in Vegas stays in Vegas. I'll let you know.
Posted by Diane Kristine Wild at 10:14 p.m.

Today was officially day one of unemployment. You can tell by my expression of joy and wonder at the world around me, a world that's miraculously still there, 2 1/2 years later. (I exaggerate, of course. I had some great adventures in those 2 1/2 years.)

Today was also day one of the drive to Vegas. A wise person would have given herself some time between the job and the month of vacation to, say, sleep, or unpack my office boxes, or plan the vacations. A desperate person would have planned to run away at the first opportunity.

So this morning was devoted to packing, cleaning the apartment, handing over the keys to Catsitter #1 of 3, getting new tires and windshield wipers on the car, and running away at the first opportunity. The border guard seemed to think I was nuts for driving there alone, but for me the beauty of a long drive when your thoughts are in turmoil is you have no where else you have to be, nothing else you need to be doing, but drive and think and sing at the top of your lungs to Snow Patrol where no one can hear or judge you.

After such an intense couple of years, I thought I'd be doing more ruminating about them, analysing and reliving and maybe even crying over the mixed emotions of goodbyes and endings and amazing experiences and THANK GOD IT'S OVERs. Instead I was ruminating about the possibilities of the future, a future I was determined not to think about until May. I have no brilliant plan but I'm relieved that my mixed emotions are mostly confusion and excitement, not terror.

Despite the late start and the fact that I don't need to meet my friends until Saturday, I got to nearly the half-way point and this hideous hotel, conveniently located right next to a fastfood drive-through speaker, by driving straight through. (If you include a car nap and frequent bathroom breaks as "straight through".)

I've never travelled this route before, inland from Seattle through eastern Washington and Oregon, past snow-topped mountain chains, sagebrush-covered cliffs, army bases, and tumbleweeds. It's not strikingly beautiful like the coastal route I'm taking home during Phase 2 of the post-employment vacation, but it has its own desolate charm.

Tomorrow will be the day for a more leisurely pace and photo opportunities along the way, but I did have one momentous ... um ... moment along today's travels: I saw my first tumbleweed. It put such a giddy smile on my face that I wish it hadn't occurred to me that I must have seen one before, mustn't I have? I've just forgotten? But I have definitely never had to swerve on a highway to avoid an oncoming suicidal tumbleweed. 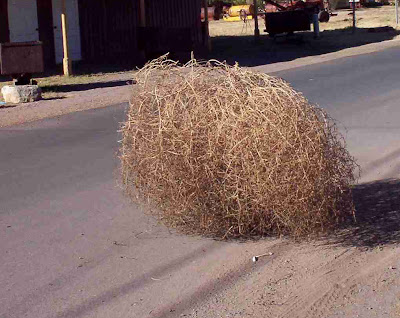 (This is not my actual tumbleweed. I was driving, people!)

I could make some cheesy analogy to the tumbleweed being like my jumbled thoughts drifting from possibility to possibility. Such as: Right now, I like that I don't have to untangle my ideas, but can let them roll around the highways of my brain ... OH GOD STOP ME NOW.
Posted by Diane Kristine Wild at 10:05 p.m.

What day is it again? 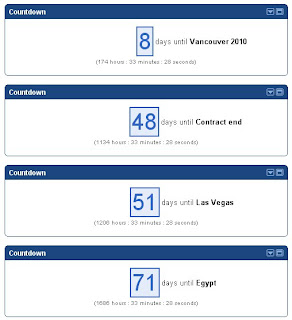 Throughout my Olympic experience, I've been obsessed with countdowns. It was built into the job: look at the IOC site and you'll see they're already counting down to London 2012 (859 days) and Sochi 2014 (1419 days). I'm guessing the only reason Rio 2016 isn't up there yet is that it's too depressing when you get past a few thousand days. We even got cake at 400 days remaining to Vancouver 2010.

The countdowns gave me milestones to reach along the way to the One Big Milestone, a way to keep track of time when it seemed endless, and something to look forward to during the often-gruelling planning phase. I blocked out the coworkers who pointed out that I was obsessively counting down to when it got REALLY crazy. In fact Games time was all the insanity with all the fun, so I feel vindicated.

The countdown as it stands now is:
And this means it's now:
I didn't mean to spend my entire April on vacation, though I did mean to spend it blissfully unemployed. Needing something non-work related to look forward to when the hours were particularly brutal and frustrations particularly high, I started sending out feelers on vacation plans with various friends, not expecting them all to pan out. Yes, poor me, I have too many plans I'm excited about jammed into one month. Try not to cry for me.

What this means for this newly revived blog*:
(* all times approximate)
Posted by Diane Kristine Wild at 8:09 p.m.

Hello? Is this thing on? Ahem ... so ... hi there. Long time no write. Which means any regular readers I once had have moved on, as I did. But I'm reviving the blog now that my day job is winding down and vacations are starting up, so I have a place to share with friends, family, and random Internet strangers my travel experiences and whatever other random thoughts try to coalesce in my brain.

I pretty much abandoned this blog and most remnants of a life after that day job took every scrap of energy and/or time I had. I migrated to Twitter, not intending it to be a replacement for blogging. It ended up seeming that way, since 140-character bite-sized thoughts are a lot easier to spew regularly than full-fledged blog posts. If you follow me there, or know me in real life, you know I'm at the tail-end of a contract with the host broadcaster for the 2010 Olympics and Paralympics (no, not CTV or NBC ... someday I'll post about my experiences and explain in more than 140 words what the role of a host broadcaster is for those, like me before taking the job, who don't know.)

Now I look forward to writing about something other than sports broadcasting and 140-character thoughts. If I remember how. In the meantime, I just wanted to say hi. I've missed you.
Posted by Diane Kristine Wild at 10:33 p.m.

Labels: It's All About Me
Newer Posts Older Posts Home
Subscribe to: Posts (Atom)