The Return of The 4400: An Interview with Show Creator Scott Peters 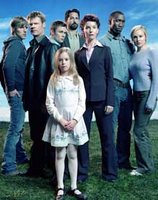 For a man who has assembled a fictional reality full of political and religious intrigue, bias and bigotry, The 4400 creator and executive producer Scott Peters is remarkably happy to be kept too busy by that world to be consumed with the weight of this one.

"I'm completely and utterly disconnected from the world. I have no idea what's going on, I don't watch the news, I have no concept of what's going on outside our little backlot here," he explained with a laugh during a hurried on-set lunch break, when asked about his own television habits. "It's not like I'm some crazy hermit running away from the real world, but it's certainly a relief not to have the morning shows and the nightly news and whatever else is going on. The hubbub of regular life interrupts, so it's great."

Though he may think of the North Vancouver studio where The 4400 is filmed as something of a haven, he isn't entirely convincing in the role of sheltered naif. The native of Windsor, Ontario, who has made Los Angeles his home for many years, has said the events of 9/11 helped inspire the premise – how people react to a catastrophic event that disrupts not only their lives, but changes their world view.

In Peters' supernatural world, that event was the return of 4400 people who had been abducted over the years, and whose displacement in time and paranormal abilities cause havoc not only with their lives, but with a frightened and mystified public. An agency of the Department of Homeland Security is assigned to investigate, entangling the agents' lives with those of the 4400.

With its third season premiering June 11 on the USA network, The 4400 continues to draw inspiration from current events. "It's not just a simple cut and dried, yes or no, right or wrong all the time, same with everything that's going on with the war on terror, with the war in Iraq, with all the things we struggle with on a day-to-day basis," Peters said. "We hold a mirror up to that in this world, and have it be as sophisticated and complex and difficult, with issues that are as difficult to struggle with, as in the world we face every day."

The show touches on themes such as government control in our lives, an eroded right to privacy, plus more personal, family stories, and Peters downplays the science fiction elements, at least as much as possible given its premise. "I think any time you have a world where 4400 people appear out of a ball of light, you've already got a pretty strong sci-fi convention," he deadpanned. "So I don't think you have to keep pounding it into everybody's head, and having it be spaceships flying around, and aliens running back and forth, and all that kind of stuff. Once you've signed off on that one big sci-fi premise, if it settles into more of a drama, that's better for me."

The cable series' short seasons – 13 episodes this time – mean nearly a year has passed between the season two finale and the season three premiere. Canadians have a few more months to wait, likely until September, for the Space channel to begin airing the new episodes.

That second season finale presented several tantalizing glimpses of future storylines, including the idea of an impending war, the apparent resurrection of an assassinated character, and a suddenly grown-up baby, among others. Peters promises some resolutions ... sort of. "We like to answer some big questions, and in the answering of those questions, create bigger questions."

He also reveals a slight change in focus. "We're trying to build the mythology a lot more, trying to stick with our core characters throughout their travels this season. We found last year that we liked meeting new characters and having them interact, but we didn't want the show to just become that. There's still an element of that, it's just we've pulled back on it a lot and really focused on the main characters, the main cast, and how their lives interconnect."

That mythology includes the story of how humans of the distant future abducted then returned the 4400 in order to prevent humanity's destruction, in part of an elaborate but so far vague plan. "We know who did this, but we don't know specifically who did this. We know why they did it, but we don't know specifically why," said Peters. "So we're trying to give the audience more of a peek of that behind-the-curtain aspect of the show."

The fact that aliens were not behind the abductions took the show in a surprising direction at the end of the first season, and Peters hints at more twists to come. "We love to take an audience down one path and have it be clear and obvious that it must be A, and then suddenly we turn a corner and it's actually B."

Though known now more as a writer, Peters got his start in directing, and has returned to his first love. He's currently directing the ninth episode of the coming season. "This is really a different creative muscle to flex, plus it's just a bonus and a huge treat to get to do it on a show I created," he said. "There's just this enormous trust from the moment we set foot on the soundstage, and they're willing to let themselves go to places I think for me that they're not necessarily willing to go with a director they don't know."


"It's a definite steering through shark-infested waters."

Adding yet another activity to keep him away from his television set, Peters has been invited to lead a Master Class at the upcoming Banff World Television Festival, a gathering of industry professionals. "I'm really looking forward to interacting with everybody up there and sharing my experiences and learning about other people's, of their trials and tribulations in this great, terrific, wonderful, fun business."

He intimates that he will share the possibly not-so-fun intrigues of getting The 4400 on the air and preserving his creative vision. "We've been through many hurdles, we had to avoid many landmines, we had to protect the show at times, we had to let the show go in a certain direction that maybe wasn't intended another time."

"I think the biggest obstacle all the way through is just to protect the original vision," he continued. "There are a lot of elements that come at you as you're trying do that, and you either have to pick up a shield and a sword and try to defend it, or let it go. You have to pick your battles and what you are willing to relinquish and what you're not willing to, in terms of the original vision. Sometimes you have to pick a battle and fight to the death."

His original vision has evolved over the years, though in a more organic, non-combative way. "Like when you're bringing on an actor to play a character, you start to write to their strengths and stay away from their weaknesses," Peters explained. "So like that, as the series begins to unfold and evolve and take on a life of its own, you get a sense of what really works well and what doesn't work so well, given our time and budget and what we can achieve."

His pride in the show, which earned him an Emmy nomination for co-writing the pilot mini-series, is evident. "I like that it's evolving, and I like that we're deepening the story between all the characters. It's not just a story of plot, but it's a story that really brings these characters to life and keeps them as three-dimensional people and not just cardboard cutouts."

For more of our discussion, see the Q&A.
Posted by Diane Kristine Wild at 7:16 a.m.