I wish I could remember where I encountered a link to the Very Short List site, but when I saw it I had to add it to my bookmarks and my sidebar links. You can sign up for their daily e-mail too, but the idea is that VSL points out "one cultural gem, five days a week."

Over the last week, I've been introduced to The Take-Away Shows, featuring new, arty videos by bands such as the Shins and Arcade Fire:

On the Parisian Website La Blogothèque, photographer and filmmaker Vincent Moon regularly contributes a video feature called Les concerts à emporter (“The Take-Away Shows”) in which he films emerging bands in distinctive locations around France, performing songs in one continuous take. In a particularly memorable installment, the Brooklyn-based quintet the National play their forthcoming track “Start a War” while seated around a dimly lit dinner table, a somber setting that adds an extra layer of atmosphere to an already eerie song.

Another gem is a Coke ad with a song by Jack White (of the White Stripes). Yes, it's an ad, but it's the coolest ad I've seen in a long time, and the song is damnably hummable:

Then there's an art exhibit called La Chute (The Fall):

[Denis] Darzacq created the images not through digital tricks but by enlisting the help of break-dancers and using locations on the outskirts of Paris ignored by romantic photographers like Robert Doisneau. He was inspired by the 2005 riots in those working-class suburbs and has said his intent (so French) was to illustrate an alienated generation. The sense of estrangement is palpable, but so too is the odd and chilly beauty of gravity. 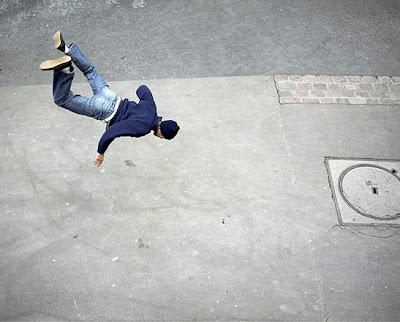 I haven't signed up for the e-mail because I'm in no danger of forgetting to check out the website every day for a new cultural gem.
Posted by Diane Kristine Wild at 1:01 p.m.