My first (mostly) House article for Blogcritics in forever includes interviews with two mental health professionals: the president of the American Psychiatric Association and a psychologist/psychotherapist: 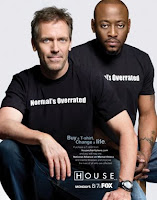 As the 2008-09 television season ends and networks begin to reveal plans for their 2009-10 schedules, a surprising pattern emerges.

Pilots in contention for the upcoming season include NBC's Legally Mad, with Kristin Chenoweth as an attorney with flashes of psychosis, and FOX's Maggie Hill, whose title character is a heart surgeon with schizophrenia. Canada’s Showcase recently ordered Shattered, a 13-episode series starring Callum Keith Rennie as an ex-detective with dissociative identity disorder.

Renewed freshmen series Fringe and 90210 feature main characters coping with psychiatric conditions. And among the more senior series, House led up to Monday's season finale with a storyline involving suicide and Hugh Laurie's dysfunctional doctor questioning his sanity after confronting his inner Cutthroat Bitch: Wilson's dead girlfriend Amber appeared to him as a facet of his tormented psyche.