The soundtrack to my life ... or at least, my favourite show

We knew it was coming, and now there's even an official announcement and track listing. 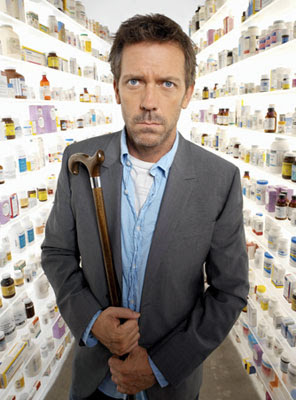 The FOX site lets you listen to samples now, and download a free track: Josh Rouse's "God, Please Let Me Go Back." September 18 is the release date.

I probably would have bought it anyway, even though I have most of these songs, since, c'mon, it's House, but the inclusion of the Elvis Costello track, the elusive cover of the Christina Aguilera song from "Autopsy," makes it a sure thing. So does the curiosity factor of listening to "You Can't Always Get What You Want" from Band From TV -- that's Hugh Laurie, Greg Grunberg of Heroes, James Denton of Desperate Housewives, and other actor/musicians. The soundtrack would be seriously lacking if it omitted that song, which humorously and then poignantly bookended season one.

The announcement linked above says the Sarah McLachlan version of "Dear God" was only previously released in Canada, and while I love her version -- I love her -- I don't actually remember it from House. Anyone?

I much prefer "Get Miles" from Gomez, used in "Distractions," to the included track, heard in "Half-Wit," but that's a quibble. There are so many sad omissions here that it would be ungrateful to whine about them. There've been, what, 70 episodes, with at least one memorable song in most? That's not going to boil down into one CD, even if you imagine the show could get the rights to put them all on their soundtrack.

Within those limits, they've done a good job of picking some emotion-laden tracks that evoke memorable scenes or character moments. There's the theme song, of course, with its heartbeat-like rhythms, though only the North American version gets it, presumably for the same rights issues that mean, I believe, only the North American airings of the show use it as the theme.

"Got to Be More Careful" by Jon Cleary (not, as the FOX site calls him, Jon Clearly), is what I think of as the anthem of the Vogler arc (great song, not such a great arc, but an important one). Ben Harper's "Waiting on an Angel" was used in "Lines in the Sand," when House made a connection with the autistic boy. Who could forget "Feelin' Alright" by Joe Cocker playing in the priceless final moments of "Detox," when House was on a long-awaited high after admitting he's an addict but insisting that isn't a problem. Lucinda Williams' gorgeous "Are You Alright?" ends "Fetal Position," when House sits at home alone in his own version of the fetal position. And Josh Ritter's "Good Man" rounds out the season in "Human Error", with House alone in a very different way, having pushed out or fired all his staff.

The omissions that make me sad would take up another lengthy post, and since I have at least most of the missing tracks already, I'm not sure why it makes me sad to have them missing from the official release. But Grant Lee Buffalo's "Happiness" reminds me of House himself every time I hear it, as does Ryan Adam's "Desire" to a lesser extent. And including Dave Matthew's "Some Devil" would have seemed fitting since the man himself eventually appeared on the show.

But I said I wouldn't dwell on the inevitable little heartbreaks, so instead I'll end on something that possibly makes me too nerdy for words for being ecstatic about -- Vancouver's own Nettwerk Records is releasing the soundtrack. That's the music company that sells DRM-free MP3s from their store; the company that's so against the record industry suing their customers that they offered to pay the legal fees of a Texas man being sued by the RIAA; the company that is attempting to revolutionize the way the music industry does business by putting more control in the hands of the artists, and by focusing on selling music in all its forms instead of just pushing CDs.