There’s no House today, and I’ll miss next week, too, so here’s a silly substitute for a Tuesday review.

A friend sent me a present: 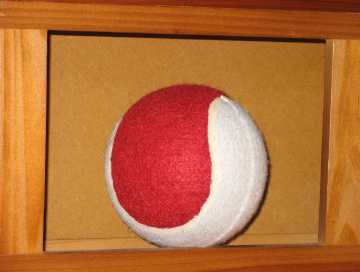 It’s a dog toy from Target. I have no dog. So why this particular gift? Because I asked That Damn Question of House writer Lawrence Kaplow:

DK: Have you seen on the Television Without Pity site that people are obsessed with the ball on House's desk?
LK: Yes.
DK: Would you reveal what the ball is?
LK: No.

I swear, I'd never had the slightest interest in That Damn Ball.

Affectionately known as the BOUO (Ball Of Unknown Origin) to those who aren’t bitter towards it, on TWoP, the ball became almost as famous as Hugh Laurie. Before the site embraced House and gave the show its own overwhelming forum, there was a single discussion thread with a smallish group of discussers. During a lull between episodes, someone who has since become an offline friend — in fact, the friend who gave me the ball — posed an innocent question, expecting a simple answer: what is that ball on House’s desk?

Too big to be a tennis ball, too wrong to be a lacrosse ball, too unlike any other sports ball anyone could identify. There were claims it was a practice tennis ball, a therapy squeeze ball, a dog toy. The discussion got intense, with speculation that House and the as-yet-unseen Stacy had owned a dog together, and he kept the (miraculously unslobbered-on) ball as a memento. I wasn’t a participant in this debate; I was an amused observer. I didn’t care what the ball was. It was just another House toy. A new episode aired, and the discussion moved on.

But then the BOUO became a running joke. You could say we embraced it as an ironic symbol of our obsession with a TV show, if you wanted to get pretentious. We laughed at what the writers would think if they knew we were discussing a prop with the same fervour as the themes of the show.

Then it turned out they did know. So I asked That Damn Question as a shout-out to the TWoPers, but the shout-out got shot down. At least I didn’t ask what kind of tree he would be.

Now, it’s personal. Now, it's a challenge. Now, I care. In some episodes, That Damn Ball seems to have more screen time than the much more noteworthy Robert Sean Leonard and Lisa Edelstein. In "Failure to Communicate," House steals a substitute when he's in Baltimore, while Chase plays with the original. In “Distractions,” the camera lingers on it when House cradles it during his migraine. In last week's "Skin Deep," it gets a closeup when he squeezes it in pain.

Is it a coincidence the ball gets such prominence? Call me paranoid, but I think not. They’re mocking us.

A new episode of House returns March 7 at 9 p.m. on Fox. Watch for the ball.

Link:
(Cross posted to Blogcritics, believe it or not)
Posted by Diane Kristine Wild at 7:40 a.m.