But now many responsible pet owners in Canada have been blindsided by the realization that the food they’re feeding the furry members of their family contains poison, and the unregulated market in Canada means there are no assurances that alternatives are nutritious or safe. For example, Royal Canin, my cat’s regular dry brand, the brand recommended by my vet, is being sued for having dangerous amounts of Vitamin D in some of their products (though not the kind I buy).

Menu Foods are at the centre of this week’s massive recall. They produce many different types of pet food brands, and it’s the cuts and gravy type that were recalled after causing the death of 15 and counting animals in North America. When the FDA tested the food, 1 in 6 animals died. (They had to test on animals? Sigh.)

Then came word that rat poison is the culprit. No one seems to know yet what this finding means – was it contaminated accidentally, or is this a pet version of the Tylenol tampering of 1982?

In the United States, the Food and Drug Administration is investigating the recall and monitoring consumer complaints. Agricultural Minister Chuck Strahl, who oversees the Canadian Food Inspection Agency, says pet food does not fall under the federal agency's domain.

"The Canadian Food Inspection Agency's job is to look after human food safety and production and that's what we focus on," Strahl said Wednesday.

Strahl said the Canadian Veterinary Medicine Association monitors and regulates pet food. But the association says it only provides nutritional guidelines and has no regulatory powers. 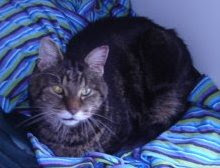 None of the recalled brands were my regular choice, though I have over the past few months bought several pouches of one — something hammered home when shopping at Superstore yesterday and seeing the conspicuously empty shelf where they used to be. My cat is old, he’s got health problems already, and the vet is concerned with keeping his weight up, so I’ve been trying to tempt his palate with various meat and gravy kind of foods. Being a cat, he’s mostly settled on the insanely expensive but unpoisoned Fancy Feast and whatever dust bunnies he licks up off the floor. Maybe he’s not so dumb after all. So he has eaten one of the recalled brands, but his health has been no worse and possibly better lately.

I had no idea pet food wasn’t regulated in Canada. Now that I know, I’m pissed. The government will legislate how animals are to be treated, but not regulate the industry supplying the supposedly edible products we feed them? According to Statistics Canada, about half of all Canadian households have pets, a total of 8 million cats and dogs. These are 8 million lives we’re talking about, lives that enrich our own.

I think it’s silly when people talk about their pets as if they’re children, and offensive to equate the death of a pet with the death of a child. My cat is not my child. He’s my pet, and that’s meaningful enough. I don’t need to justify my attachment to him — yes, dammit, my love for him — by making a parallel that diminishes the untimely, unfathomable grief a parent experiences after the loss of a child. But he’s a life, and a distinct personality, and he’s been part of my daily life for 14 years, dependent on me for food, shelter, care, while I depend on him for unconditional love.

He was a six-toed tabby stray who wandered into my apartment when I lived in a small town in New Brunswick, and he just stayed. My roommate and I named the orphan boy Oliver Twist, instantly and forever shortened to Oliver. I meant to give him away when I left several months later, but there were no takers – the town was overrun with six-toed tabby strays.

So he was treated to the first of several travels as I brought him back to Edmonton with me. He completed university with me (well, figuratively speaking – he is an enormously dumb but sweet animal), he moved to Calgary with me for my first professional job, he went back to Edmonton to stay with friends while I jaunted off to Mexico. Then, when I didn’t return when I said I would, he accompanied me to that country. When we’d had enough of that adventure, we flew back to Edmonton to get our bearings before landing finally in Vancouver, where he’s made me promise no more plane rides.

My cat has been with me through the ups and downs of nearly my entire adult life, which I can’t say about any single person. Knowing I possibly fed him rat poison I bought in Superstore’s pet food aisle? Knowing the alternatives might be canned sawdust, for all I know? Even if there were no apparent health effects, that seems wrong. It seems like an industry the government should be regulating.
Posted by Diane Kristine Wild at 5:51 p.m.