Things my PVR taught me

Just in time for the new fall season, my computer-based PVR went kaput. In its defense, it was probably broken in my move a month or so before that, but since I don't get any of those fancy channels with the supposedly great summer series, I wouldn't know. I only realized it wasn't working when I came home from work to discover it didn't record the season premiere of House on the fancy Eastern feed channel I do get, and I had to wait until the regular old time zone came through for me. It was tragic.

While I think the IR channel-changer thingamabob probably got smushed in the move (excuse the technical jargon) and it would have been a simple matter of replacing that, I figured it was an opportune time to buy a real PVR. As much as I loved my inexpensive computer-based device and got some satisfaction in figuring out how to make it work (until it didn't), I love the real PVR even more.

The ability to pause and rewind live TV, to record two shows at once without buying another thingamajig, and, of course, to watch TV on my TV easily: it's an exciting new toy. But it's also made me make think more consciously about some of my viewing habits. 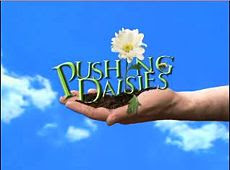 Another thing I've learned -- a lesson I need to learn every September -- is that my eyes are bigger than my ... eyes. My PVR started the season promising to record House, The Office, 30 Rock, Ugly Betty, Rick Mercer Report, This Hour Has 22 Minutes, Intelligence, Life, Dirty Sexy Money, Pushing Daisies, Bionic Woman, Blood Ties, K-Ville, Back to You, Gossip Girl, Journeyman, Reaper, Chuck, Moonlight, and Aliens in America.

Technology is making it easier and easier to bring more and more television into my living room. It's also giving me more and more things to do other than watch television. In my couch-based downtime, posting, podcasting, iPodding, Photoshopping are some of the many p's competing with the PVR.

So I had to do another "p": pare down. Maybe some of those pilots I reviewed got better with time. Maybe some of those shows I'd heard were good would have captured my attention. But in a cluttered world, a cluttered PVR is one inconsequential stress I don't need. It's ruthless, but if a show didn't stand out before it even aired, or if the pilot didn't grab me and shake me and never let me go, there's no room in my life or on my PVR.

So I've settled on recording House, Pushing Daisies, Intelligence, The Office, and 30 Rock, and everything else I'll catch if I'm home in a TV kind of mood. And I hate to say it, but The Office is teetering on the precipice after tonight.

Thankfully, as easy as it is to record with my new PVR, it's just as easy to delete.