New fall TV leaves me as cold as an Alberta winter 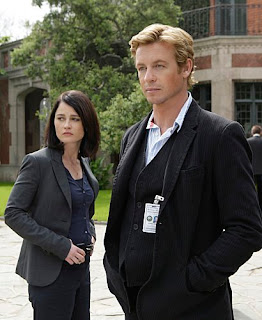 Sadly, it looks like this fall season is going to be a total wash for me. Except maybe The Mentalist, which I'll still sample not because it's a great show, but because it's just good enough, and Simon Baker is so dreamy. Don't judge me.

Fringe I wanted to give more of a chance than I did, wanting to scratch the X-Files/4400 itch, but after the boring pilot and the excruciating writing of the second episode, I sat down to watch the third episode and found my finger had hit delete after 5 minutes. Deletion of the series recording soon followed. Life's too short to hope a crappy, dour TV show gets exponentially better with time.

I loved the pilot of Privileged but the second and third episodes had me fidgeting. It was always a long shot, since I've never been into The OC/Gossip Girl/90210 territory, but I was enjoying the heart this one displayed. However, the well-assembled story of the pilot was by far the most engaging of the plots, and I'd been there, done that, grown out of it long ago with the other storylines. I feel downright mean saying this, but the series is handicapped by a couple of very, very bad actors (the sister and the friend Charlie) and while I still find lead actress JoAnna Garcia charming, that wide-eyed, head-bobbing charm wore off a little with repetition.

Gary Unmarried wasn't as horrible as I was expecting (I know, go crazy with the praise there, Diane) but Jay Mohr's descent into According to Jim Belushiness makes me sad, and I need more than a few laughs to make me put a show in regular rotation.

I recorded Worst Week and deleted without even watching. With some series, you just know it's not going to be for you, and I hated this one when it was a movie called Meet the Parents.

I might still check out Life on Mars and The Ex List (though the acrimonious departure of creator Diane Ruggiero makes me hesitate on that one), but I'm not holding out hope that any new shows will be added to my PVR this fall.

I'll write my thoughts on my favourite returning series when enough of them have come back – Pushing Daisies this week! A sneak peek: so far, House is breaking my heart. And not in the good, killing Wilson's girlfriend kind of way.
Posted by Diane Kristine Wild at 4:21 p.m.