Book Review: Why Moms are Weird by Pamela Ribon 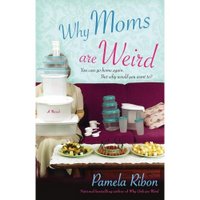 Why Moms are Weird has a title we can probably all relate to, but don't expect an answer from Pamela Ribon's latest novel. This is not a universal story. My personal take on why moms are weird might not involve getting a phone call from said parent to discuss her possible sexually transmitted disease, or her hoarding instinct that leads to a house full of garage sale finds and stray dogs, or her ability to juggle several amorous men without any of them getting too close. But maybe that's just me. Maybe most moms are weird like that.

The title is a wink at Ribon's first novel, Why Girls are Weird, and the book itself is likely to be a familiar blend of humour and pathos to anyone who knows her writing - and that's a lot of people in cyberspace. For Pamela Ribon is more than a novelist; she's Internet royalty. She was blogging long before there were blogs, paying the bills through an online journal called Squishy that had a devoted following. She maintains it today at Pamie.com, and used it as inspiration for that first novel. Plus, not only did she write about television as a former recapper for Television Without Pity, she writes for television, with credits on Mind of Mencia and last season's short-lived Hot Properties.

There's maybe a more melancholy tone to Why Moms are Weird compared to Girls, though there's still humour ranging from sardonic to goofy. Our protagonist, Benny Bernstein, flies from Los Angeles to Virginia to take care of her widowed mother, whose broken leg has left her incapacitated. But Benny learns that the broken leg is more of a symptom than a cause, and sets about trying to make things right for and with her family, at the same time as she attempts to sort out her feelings for two men she can't admit she wants.

Ribon's engaging writing style makes up for the fact that there are few moments of recognition for me in this particular incarnation of chick lit. While Benny absorbs lessons in how to love her family, her men, and herself, there's an air of unreality to the romance aspects. Mickey is the boy she left behind in LA, the sensitive and passionate boy who claims to love her after mere weeks. Zach is the boy in Virginia, the sensitive and passionate boy who claims to love her weeks after being hired to help clean her mother's house. Both men come across more as fantasy objects than fully realized human beings, and while jealousy may be clouding my judgement, it's difficult to identify with or feel too much compassion for a woman who has two fantasy men fall in love with her within weeks. Bitch.

Despite its rose-coloured romance, Why Moms are Weird is weightier than many books classified as chick lit, with an emotional resonance that surpasses the sometimes credibility-stretching plot. Benny is the self-proclaimed sane one, but she discovers that in judging and trying to fix her family, she's alienating them in the process. She's still reeling from the loss of her father, and has to watch her mother move on, both ineptly and decidedly. She worries about her younger sister, who puts up with an abusive boyfriend and can't seem to escape living in her mother's house. Benny deals with the body image issues of a girl who grew up overweight and can't reconcile herself to the fact that people see her differently now that she's slimmer.

There are occasional too-precious moments, like Benny and Mickey exchanging "loglines" to get over that boring first date chit chat. What's a logline? Ask someone from Hollywood. But Ribon provides minute details of Benny's confused thoughts and feelings, sometimes seasoned with unexpectedly exquisite jokes, such as Benny comparing herself unfavourably to the girl she's subletting her apartment to, the graceful Grace: "I'm Benny, full of klutz."

I've never fallen in love in a car, or thought the music in a supermarket was an omen, which means Benny's quirkiness didn't always resonate with me, but there's a lot to like about the character, including the fact that she's not always likable. She's neurotic and self-righteous, but she's also trying desperately to do the right thing. The book suffers a little when she crosses the line into "why the hell would she do that?" unlikeability, but overall, Why Moms are Weird is an enjoyable light read with some welcome weight to it.
Posted by Diane Kristine Wild at 12:08 a.m.