Life as I didn't know it

Since Seattle can be an easy day trip from Vancouver, I felt the need to overexplain to people at home why I was coming here for a week, to visit a friend here on business who normally lives much further away. "And the shopping," a couple of friends added enthusiastically, needing no other reason to spend a week across the border. They imagine me haunting the outlet stores, plus Macys and Nordstroms and all the other stores we don't have in Vancouver that I'm supposed to be excited about. 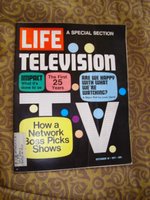 I'm not completely ungirly. I like pretty clothes and jewelry and stuff. I just don't like shopping for pretty clothes and jewelry and stuff. I walked into Sephora, the cosmetics and fragrance emporium, but was too overwhelmed to even think of buying anything. So I suspect I'll disappoint my shopaholic friends when I show off my prized find so far: a Life magazine from 1971, featuring a special section on the 25th anniversary of television, from a shop in Pike's Place Market. 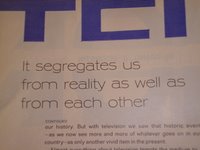 My friends may not be impressed, but I think it's priceless for its pronouncements about how TV is destroying society as we know it, and for the feature on how a network executive planned that year's schedule. There's a lot that seems quaintly dated (game shows held that scornful place now reserved for reality television), some that's intriguing for the prescience (All in the Family had recently become a sensation, and the network exec predicts it will open up other series to approach weightier issues), and some that sounds laughably like the doom and gloom way we talk about television and its diminishing audience today - even some that sounds like how we talk about the Internet today (like the photo to the left). I might do a real post on it when I've read it all, but I just had to share the pretty pictures first. 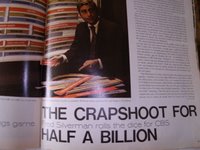 The special TV section was the draw, but it's cool to flip through the rest of the magazine and see casual references to President Nixon, and Vietnam, and a tribute to Margaret Bourke-White, the former Life (among others) photographer who'd just died.

If that's all I buy in Seattle, I'll be happy. But I might have to go back and get some Sephora lip gloss to prove my girly credentials.
Posted by Diane Kristine Wild at 1:44 a.m.