We don't need another hero 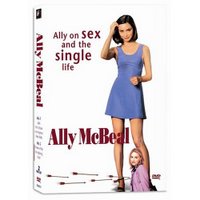 I finished watching Ally McBeal, my consolation DVD that has put off me seeing any more of season one of Lost for a while. It came as a two-disc set with six episodes from the first season, and it looks like that's all we get. In a post-Sex and the City world, Ally McBeal is probably too dated for people to want to revisit in depth.

I watched the series when it aired, though not to the bitter end—I thankfully missed the long-lost daughter storyline, for one. I wasn't sure it would hold up for me now, so it was nice to find that it did. Though the brief taste of it was probably just enough to appreciate it without choking on its determined quirkiness.

There were a lot of gender politics going on in that show, and it didn't always land on the expected answers when it even gave answers. Do women want men to protect them from insults by throwing a punch? Ally says yes. Do men prove their manhood by throwing that punch? John Cage says yes. Do sexual harassment laws even the playing field, or position women as victims? Georgia says they're required protection, Richard Fish says they create victimization.

Fish was the most obvious representative of what should seem like wrong-headed opinions, but he often raised valid points about the differences between men and women, and the way laws seen as victories by feminists could actually be perceived as anti-feminist. Ally herself wasn't the voice of traditional feminism, and thank god. Most women aren't, and women don't speak with one voice anyway. Plus there were the skirts. Feminists don't have legs, or something like that.

I have no faith in my knowledge of the overall television landscape, but my perception at the time was that there were few shows that showed women exposing their flaws, exposing their loneliness, exposing their legs, searching for something strong women aren't supposed to search for. Most TV women seemed to me to have perfect, snappy lives with jobs and families or witty romantic tension with the guy you knew she'd end up with in the end. Oddball Ally wasn't going to end up with Bland Billy, and that didn't seem the relationship to root for anyway. It was the idea of the love she shared with him, and her search for a love like that again, that propelled the show.

I could write the opposite point of view very easily. I could dismiss the notion that a woman is incomplete without a man. I could decry that a man—David E. Kelley—would have the nerve to create a character whose central purpose is to find a man. I could toss in the quote that a woman without a man is like a fish without a bicycle. But that ignores the fact that most women, most people, want a partner to share their life with. Ally wasn't just a wreck who needed a man. She was a wreck who had a career she loved, a life outside work, supportive friends, but there was one thing she wanted that was missing in her life. It's all in the theme song: "I believe I am ready for what love has to bring/Got myself together, now I'm ready to sing." Sure, roll your eyes, but you know you're going to be humming that to yourself later.

Watching a couple of the more gender-politicky episodes reminded my of a recent conversation I had with a friend about the controversy over the Rescue Me rape scene. (Neither of us has ever seen the show, which didn't stop us from having an opinion, of course.) She pointed out that it must be frustrating for a writer trying to create a scene that says something about two characters to find that scene being taken as an overall statement about an issue. In Ally McBeal's case, she wasn't the voice of all women; she was the voice of a (fictional) woman.

I said I think it's possible for a show to show actions and express ideas that are troubling, even reprehensible, and not be advocating those actions and ideas. Not only is it more interesting to have perceptions challenged instead of constantly reinforced, but there's not much substance to an unexamined opinion (unless it's me and my friend talking about a show we've never seen).

Ally McBeal wasn't quite a feminist role model, but I don't need or want television and movies and books to provide role models for me. Maybe that's what parents want for their children, but I think adults should be capable of slightly more complex thinking. Like that Ally is the kind of emotional mess I wouldn't aspire to, but can relate to a little, tiny bit. She was an interesting, funny, quirky character in a show that had a lot to say about what made men and women different, and celebrated those differences. Whether I always agreed, or always related, was irrelevant, and at least it made me think about what I thought.

Plus, it was kind of liberating to have a role model—I mean, a screwed-up TV character—who admitted she wanted something more than a fabulous career, fabulous friends, fabulous (or scandalous) wardrobe. It was refreshing to see a show acknowledge that even though women are empowered to have it all, that doesn't make it any easier to get it all.
Posted by Diane Kristine Wild at 9:31 p.m.