When the folks on Intelligence clean up, things get pretty messy. In "Cleaning Up," an episode where Jimmy's revenge supposedly comes full circle, a lot of loose ends remain. Good thing, because the season's still got four episodes left. With all these spies, informants, and criminals relying on trust and loyalty in this episode, it's even harder to believe things are getting cleaner.

Picking up from the dead body lying on the pavement at the end of last episode, Phan and friends take off from the botched currency exchange as he says in the flattest voice possible, "This is a real drag."

Jimmy thinks it's a bit of a drag, too, as does biker boss Dante, whose nephew is the dead body on the pavement. Mary thinks it could be a drag, fearing escalating violence, but she's reassured by her prized informant that what went around came around. The revenge circle closed - supposedly - when Jimmy finds out that the nephew was carrying the gun that killed Colin, Reardon's distributor on the Island, added to the fact that Mike's attacker was one of Dante's Disciples. The score is settled, Jimmy insists.

Mary's machinations get a little messier, too. Her friend Eddie and his ex-CIA partner (Stuart Margolin, who also directed the episode) help her get intelligence on the cocaine dealer they're tracking, Luiz Falcone, in exchange for her go-ahead for them to take him on her turf, despite the fact that under DEA protection. That leads her to stockbroker Randy Bingham, who's supposed to be one of her informants, and another gun deal.

Plus, her supposed CSIS supporter James Mallaby lets her know Roger Deakins is finally out and her appointment to take his place is just a matter of Ottawa giving the okay. In the meantime, Mallaby'll be taking over. And he has a bridge he'd like to sell her, too. She's not buying, though, and continues to marshal support from a senator and her underlings, Martin and sneaky Ted, whose jaw must ache from all the talking through clenched teeth he does in this episode.

Mary suspects Richard Royden, the CSIS director, of being the high-powered leak, and even enlists Deakins help to expose him. Deakins is apparently on board to preserve his own reputation, but he points out "you do this and fail, they'll have your head and mine on a stick."

In another "devil you know" deal that means she's playing with fire, Mary's attempt to swap her old job for Ted's loyalty starting now only results in sneaky Ted suspiciously fiddling with items on Mary's desk - spying on the spymaster, maybe? - and accelerating the plan to snare Reardon in the DEA's trap.

That plan seems to be working, too. Winston the undercover DEA agent managed to escape arrest by invoking Ted's name, allowing Reardon to walk away from a potentially messy situation. Despite Ronnie's protests that Winston obviously isn't someone they want to get into business with, Jimmy is desperate enough for the supply that he continues with the deal. Some day Jimmy will have to hear a big "I told you so" from his partner, but for now the deal is done and the DEA plan to trace the shipment across the border.

While he unknowingly gets deeper into trouble, his banker and lawyer encourage him to go a little more legit (is that like being a little pregnant?) so he can invest in his own offshore bank. 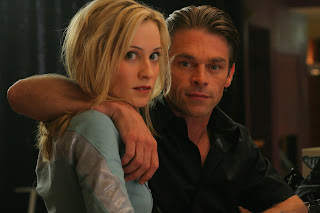 Ex-wife Francine is causing deeper troubles as well, going into a jealous coffee-throwing fit when she discovers he's sleeping with another woman while daughter Stella's in the house - though the jealousy trigger is that she thought they were getting back together, not so much the impressionable Stella. The deluded woman implores Ronnie to help her get back in the family, leaving him with a threat of trouble if she's left to "drown" on her own.

She's got good reason to want back in, and not just because she's still obsessed with Jimmy. Reardon is loyal to his family, so when a shaky Mike calls after running into his attacker in the nightclub he's hoping to buy, Jimmy and his henchman Bob rush down to take care of business. So much for that closed circle and settled score. It's all part of the job for Bob, and another glimpse into Reardon's frightening underworld in a series that doesn't judge Reardon any more harshly than Spalding. Neither of them are possible to fully root for, but it's impossible to root against them, either.

The next episode of Intelligence - directed by star Ian Tracey - airs Tuesday, Dec. 12 on CBC at 9 p.m.