If I trusted CBC's Intelligence to telegraph its intentions, I'd think the tide has changed in Mary's favour and against Jimmy in "Things Change." But because the next episode could conceivably be titled "Things Change Again," I wouldn't count Jimmy out or lay any bets on Mary's smooth sailing.

But for this episode at least, Mary Spalding seems in full command of her empire. She discovers she has support from Ottawa to take over the Pacific Region of CSIS and to pursue her plan to topple Director Richard Royden, who she finds out has been investigated before. Escort boss Katarina is enlisted to seduce a willing Royden, who seems particularly interested in her "party planning" skills.

Mary's even playing puppet master to Roger Deakins, the man whose job she's about to take, and who had been working to topple her. It's not clear that he's abandoned his association with the devious Ted, but he's now working with Mary against Royden to save his own reputation.

With more flexing of her muscles, she put the screws on stock broker and informant Randy Bingham, who's shocked to learn that not only does she know about the arms deal he tried to hide from her, but she knows something he doesn't - that the DEA is on to him, and in on that deal. She even makes her friend, freelancer Eddie and his ex-CIA friend happy by coating with cash her refusal to let them snag Falcone, their prey and Bingham's contact, until she's learned all she needs.

Recalcitrant stripper Tina is even made to start producing some useful intelligence when Mary reminds her that her visa depends on details, not vagueness. Tina manages to get alone with Reardon's banker's locked briefcase, and summons Mary.

Seemingly at the height of her powers, Mary's imminent appointment to CSIS forces a change in Ted's game plan - though that's a plan she's still not aware of, and which is poised to jeopardize her future job, her relationship with informant Jimmy Reardon, and her credibility.

While the DEA stalls in getting more pot to pass off to Reardon and tries to unload cocaine, which Jimmy refuses, Ted decides they should move in on Reardon's US distribution immediately instead of waiting for the additional shipments. Though Winston the undercover DEA agent has made a couple of missteps in his dealings with Reardon, Jimmy can't see past his need for a supply of pot to spot the dangers.

The noose tightens a little more, with Jimmy getting in bed with the bikers in a couple of ways. He unintentionally sets the DEA on to them by referring the coke shipment to Dante, and very much intentionally offers his planned offshore bank as their money laundering solution, and the key to getting rid of the disputes over the "penny-ante" ATM business.

When his lawyer asks about ex-wife Francine's previous implied threat, and reminds Jimmy how damaging it would be to have her spill about the Reardon empire, Jimmy replies that he's taken care of it with a confidence I have trouble believing is completely justified.

Almost as if he were actually smart and business-like, Mike buys the bar his slasher was stabbed in, without brother Jimmy's help - for now. And the episode closes on that upbeat - for now - note. But I'm completely confident Mike's going to find a way to screw it up for himself and for Jimmy too.

Ian Tracey, who plays Jimmy Reardon, directed this episode, showing mastery of the shadowy, shaky handheld style of the series - and giving me the opportunity to recycle some more unused quotes from when I'd interviewed him just before he was prepping to direct.

He explained his affinity for throwing himself into the show behind the camera as well as in front of it. "When I'm not working I don't know what to do with myself," he laughed. "I have a lot of experience, 30 years of acting, a decade or so of lighting, so I've got a lot of technical understanding, the understanding of how things are shot, especially at that pace." 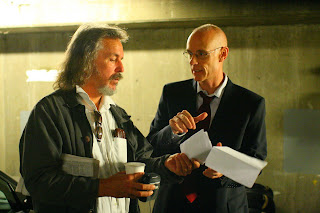 Chris Haddock, creator of both Intelligence and Da Vinci's Inquest, gave Tracey his first crack at directing on Da Vinci's. "I loved it, I was afraid of it, I did it anyway. I felt the pressure was on given the success of the show, but at the same time I felt like part of the family already," the actor said. "A couple of years later Chris gave me another opportunity, and now it's come up again. I'm going to take the opportunity every chance I get."

The next episode of Intelligence airs Tuesday, January 9 at 9 p.m. on CBC.