There's a "fact" I've heard thrown around every few months since I moved here four years ago, from people decrying the changing face of Vancouver: white people are now the minority. According to the 2001 census, 48 percent of the population here was a visible minority. That number could very well be over 50 percent now, but the "fact" relies on lumping people into two categories: white and non-white. To me, that ignores a whole lot of difference within those groups in order to create a meaningless dichotomy. And it's partly the differences that make Vancouver an amazing place to live.

I had a boss who drew a Venn diagram to demonstrate his pet theory of life. Yellow is my experiences. Blue is your experiences. His theory was that the way we relate to each other is in the purple - that it's our similarities that draw us to each other. 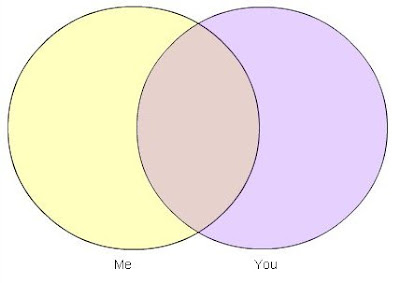 That theory works for the field we work in. In communications, you want to reach people with a message that has meaning to them. It works to explain that initial connection we feel to someone when we discover they share our affection for House and folk/punk English singer/songwriters.

It doesn't explain why it's more annoying to have a sycophant constantly agree with everything you say than to be with someone who challenges you to let your thoughts venture from the yellow into the blue. It doesn't explain Jerry Maguire's "you complete me."

So overall, I think it's the xenophobe's theory of life. It doesn't explain how we're often drawn to the differences in others.

One of the larger ethnic groups here is Greater Vancouver is Indo-Canadian, and one of the larger subsets of that group is Punjabi. In the suburb where I work, there's a section where the street signs are bilingual English and Punjabi. In Vancouver itself, 49th and Main, there's the Punjabi Market, a two-block area filled with Indian restaurants, sari shops, food stores, DVD stores lined with Bollywood musicals, and jewelry stores laden with sparkly things recognizable from those Bollywood musicals.

My tour guide of the market yesterday was a friend of mine who isn't Punjabi, but whose parents are from India via Africa. She shops there all the time, and explained the intricacies of Indian weddings and other rituals. Our group included a friend whose parents are from Italy, and then two of us generic white girls who can't easily define our own cultural background.

Everywhere we looked in the market there were reams of fabrics in bright colours, some so jewelled and sequined that the brides-to-be trying them on looked both resplendent and burdened. Looked at in one light, it was a festival of gaudiness. Looked at in another, it was a demonstration of an exuberance my culture - whatever it is - sadly lacks.

Browsing the shelves on shelves of dazzling material, I was left really wanting a sari. And yet I'd never have anywhere to wear one, and I can't help but feel I'd look ridiculous, trying on someone else's culture like a costume. Plus, I'd never be able to tie it myself.

I lusted after a Pashmina that was five times as expensive as any of the other ones because of the beautiful, subtle embroidery.

Instead, I made do with a great lunch, some tea supplies, and, from the combination butcher shop/DVD store a few blocks away from the market proper, some pre-marinaded Tandoori chicken. And I'm thankful to live in a place that makes it so easy to realize that life's a lot more interesting when Earl Grey coexists with chai, KFC with Tandoori, and where good friends can act as tour guides to another culture.