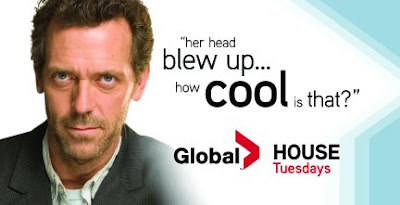 NOT VERY COOL AT ALL, THANK YOU VERY MUCH.

Ahem. I still have flashbacks. That's the billboard Global is using to promote the show this fall. I like it, except for the reminder of the image I've been trying to block out of my head since May. Thanks Global.

Not for the head exploding episode, but this week House won the Outstanding Prosthetic Makeup Creative Arts Emmy for Que Sera Sera. The award goes to Dalia Dokter (love that name!), Jamie Kelman, and Ed French. David Morse did not win for creeping me out. House is still up for Outstanding Drama and Hugh Laurie for Outstanding Lead Actor on Sunday, of course ... in the Emmy award ceremonies that could have been hosted by Hugh Laurie, but instead FOX went with Ryan Seacrest, who isn't quite overexposed enough.

In other random House news, via Televisionary, CharityFolks.com are hosting a charity auction of television teapots. You can bid on designs by Ugly Betty, Family Guy, The Office, and many others, including House: 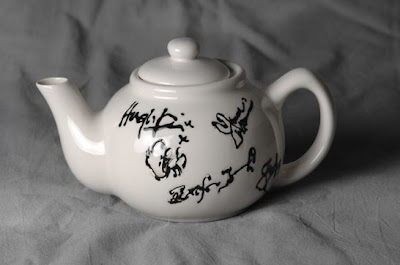 The House one isn't particularly creative - it's signed by the cast, with the logo on the other side - but some of the teapots are pretty cool. Proceeds go to the educational foundations of the Academy of Television Arts and Sciences (the Emmy folks) and BAFTA/LA.
Posted by Diane Kristine Wild at 10:50 p.m.