Does this make me the shoemaker's kid? 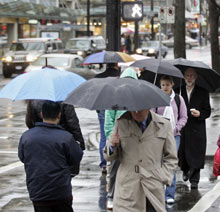 Here's a fact few people know: it rains a lot in Vancouver. Usually, that means it rains many days of the year. In the last couple of days, it's meant freakish amounts of water have been pouring over the region, blown in on the freakishly strong wind.

I work in one of the areas that was fairly hard hit. Wednesday, our office was on the only block around that still had power. How unfair is that? I was really hoping for the power to go out there too so I could go home, curl up under my duvet, and fret about how much work I have to catch up on in the office. Traffic lights and street lights were out, many streets were flooded, trees had blown down on roads and crushed cars, so it took forever to get to my less-affected home neighbourhood by the time I did leave. Radio stations were reminding people to use four way stop procedures and to make sure their headlights are on. Since the sun had long gone down by the time I left the office, I had to wonder who needs reminding to put on their lights when driving in the pitch dark? And I make fun of my driving.

Yesterday, the Greater Vancouver Regional District issued a boil water advisory, which meant chaos at work and then a trip to the drug store on the way home to pick up some bottled water, along with every other citizen in the GVRD. Now many stores have run out of bottled water and people are angry, because the storms are the stores' fault and boiling water is too difficult. Quote of the day, from my friend and former coworker: "I think people were really edgy since they didn't get their caffeine fix for the day. Did you ever think you would see the day when Starbucks stopped serving coffee on the west coast? I don't think our emergency plans have considered this."

Part of my job has involved publishing information about how to prepare for possible disasters, usually tied to the flu epidemic we all expect any minute now and are cheerily warning people about, but also in preparation for earthquakes, tsunamis, and any other horrible thing that can happen to you when you live in a city on the coast in an earthquake zone. Or, really, just live anywhere. A tornado struck nothing-ever-happens-here Edmonton when I was in high school, though I happened to be on an exchange trip to France at the time. Ask people in Ontario and Quebec about ice storms and blackouts.

Me, I'm not even prepared for a bad cold. I have no stockpiles. I'm still sniffling from the remnants of that horrible flu I whined about over a month ago, that caused me to drag my plague-infected self to the grocery story because I didn't feel I could subsist on canned olives and hamburger patties. I usually wait to do a big grocery shop until I run out of cat food.

Yes, I realize how pathetic that makes me sound. But if I get desperate, there's always something unappealing in the cupboard or freezer for me to gnaw on. If the cat gets desperate, I'm the only unappealing thing around for him to gnaw on. If you've read Bridget Jones's Diary, or seen an old episode of Six Feet Under or a recent one of 30 Rock, you know that every woman who lives alone's fear is being eaten by her pet before anyone realizes she's missing. That and not being able to open that stupid jar of pesto.

The message I've helped get out is to always be prepared to be on your own for 72 hours to a week. This storm doesn't qualify as a major disaster, but if I were smart, I'd take it as a warning shot. Today I printed out the BC government's 26 weeks to emergency preparedness and will look at it soon. Maybe when this little mess is over. Or after Christmas. Or after the next disaster.
Posted by Diane Kristine Wild at 6:15 p.m.