TV Review: Intelligence - "Where There's One There's Another" 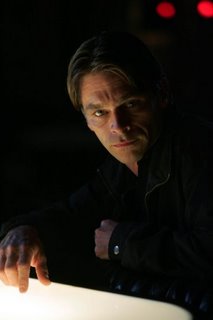 (Spoilers for the episode that aired Nov. 7)

Everyone's got an angle to get ahead in CBC's Intelligence. A very different angle from anyone else, generally. In "Where There's One There's Another," Mary and Jimmy see varying levels of success in working those angles.

Mary Spalding (Klea Scott) finally succeeds in turning her wireroom mole, who offers her information on a plot to assassinate a Chinese dissident on Canadian soil in exchange for keeping his job, his wife, his pregnant girlfriend, and the spoils of being a mole.

She works on another victory by encouraging her prized informant, Jimmy Reardon (Ian Tracey), to accept stockbroker Randy Bingham's offer of stock options in exchange for freeing his arms shipment from where it's mired in Panama. Though Reardon wants cash from the guy who already owes him, Mary just wants the deal done so she can reap the intelligence rewards.

Putting a crimp on her plans to improve the fortunes of the Vancouver Organized Crime Unit and therefore her chances of moving up to CSIS is her deputy, Ted (Matt Frewer). Ted and his DEA contact have agreed on a sting operation to bust Reardon, a big fish for the Americans and Ted's ticket to job at CSIS for himself and the withdrawal of the job offer at CSIS for Mary. Ted's got another trick up his sleeve, since before Ted will hand over Jimmy's file to the DEA contact, he insists on meeting operator leading the sting.

Another possible danger to Mary is that Tina's infiltrating Reardon's club perhaps a little too much. She's started to avoid Spalding, who reminds her that the rewards of cooperation depend on actual cooperation. Tina is sincerely as busy as she tells Mary, mostly because of Jimmy's encouragement to string along his married, father-of-two banker, who wants to set her up in an apartment and get her to quit her job. This show is nothing if not romantic, which is demonstrated again when Mary lets detective Don Frazer know their affair is just a fling, and he shrugs and says he should spend time with his family anyway.

Mary's not the only one with trouble brewing behind the scenes. Jimmy's inept brother Michael wants to start his own club and his own operation, with Jimmy's blessing and out of Jimmy's shadow. The man who's running money for Jimmy's bank machine operation is coy about how he's going to fund this operation, but Jimmy better hope that he's right, and he can trust Mike with money because it's simply respect he's after. But what if Mike thinks respect can be bought?

Mike is still living off the respect he earned by foiling the shooting attempt against Jimmy and Ronnie, and now Jimmy discovers the shooter is not connected to the biker gangs as he thought, but apparently to a Vietnamese gang. It seems like it should be good news that it's not the bikers, but the bad news is that another front might be opening up in that war Jimmy doesn't want to fight.

Jimmy's lawyer brings Ronnie and Jimmy an offer of $10 million for The Chickadee, which Ronnie turns down for sentimental reasons. He can't abandon the legacy his father build from nothing, and wants to leave it as his legacy for his not-yet-conceived children. I hope he's smart enough not to be planning on them with the not-so-sweet Sweet. After Ronnie expresses interest in turning the club into a music venue, Mike presents Ronnie with that same idea, with the bonus of his own band that could fill that venue. Putting up with Mike's band is likely too high a price to pay, but Ronnie was already satisfied with the prospect of scouting out another club to expand his empire instead.

Jimmy's lawyer also brings yet another rejected strategy to win a custody battle against Francine, a mentally unfit defense. Barring that, and all his previous suggestions, the lawyer suggests Reardon make nice with Francine, and so does Jimmy's sister Maxine. So Jimmy and Francine try to work things out, though his intention is to see his daughter, and hers is to reunite with Jimmy. With their differing agendas, dinner doesn't go well. She doesn't want to talk about Stella, and insists she only wants respect - shades of Mike, and shades of the same doubt that either one of them is worthy of respect. Francine merely proves again that she's desperate to get Jimmy back, but completely incapable of acting in a way that would make that even remotely tempting for him.

In the most heartbreaking sign of Jimmy's troubles, lucky Stella runs away from her drunk mom's school night party to the sanctuary of the downtown club where daddy does drug deals in the office, strippers do blow in the dressing room, and the occasional shooting in the bar adds even more excitement. The good news is when she's 17, her dad plans to be completely legit. Oh, and Francine's therapist thinks she's not completely nuts. I see a therapist in Stella's future, too - let's just hope that one's competent.

Instead of dwelling on the darkness of her life, the episode ends with a sweet, fly-on-the-wall scene of Stella one-handedly playing the piano to Ronnie, ending with her closing credits voiceover saying "That's all I know."

The multiple characters and storylines continue to advance along their questionable paths with intensity and unexpected moments of humour. Their next chance to make an even bigger tangle of their lives will air on Tuesday, Nov. 14 on CBC.