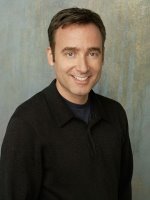 "People are always saying 'oh, this crazy dysfunctional family,' " puzzled Fred Goss, the multitalented creator, writer, star and director of the midseason ABC show Sons & Daughters, which centres around that family people are talking about. "You know, I don't think they're that dysfunctional. Unless my family was totally different from everybody else's."

The show is a half-hour hybrid of improvisation and script, comedy and drama, about "the modern state of the extended family." Goss plays Cameron Walker, the central figure in this tangle of divorces, remarriages, half-siblings, single parenthood, long-lost fathers, smart-ass teens, and exposed secrets.

He and his partner, co-creator Nick Holly, drew on their own backgrounds to create the family tree populated with sympathetic characters who not only share a genetic pool, but the tendency to make the same mistakes.

"Our background has a lot of teen pregnancies. There's a lot of divorce in my family, a lot of repeating the same bad behaviour without learning," said Goss. "Tons of stuff in the show is taken from personal experience."

The show examines everyday challenges through the lens of a supportive and loving family, though, so Goss's own hasn't complained much. "The bottom line is that the people on the show love and care about each other," he added. "They might argue and lose patience, but they're in close proximity because they want to be."

Sons & Daughters is touching and wry at least as often as laugh-out-loud funny. "The show is about trying to find humour in the mundane or the sad," Goss said. The audience that embraced it reacted positively to that blend, with effusive viewer support on Goss's ABC blog as well as critical praise.


"Nothing seemed to help it as far as the numbers went"

But despite having his creative stamp all over a refreshingly creative, heartfelt, and entertaining show, Goss isn't celebrating. Because in TV, it's all about the ratings, and Sons & Daughters' ratings were more sad than mundane.

ABC put the show in what Goss called "a death spot" against formidable competition and without a strong lead-in to boost its numbers. It normally aired opposite House, which has been attracting over 20 million viewers lately, The Unit, an earlier midseason replacement earning strong ratings, and Scrubs, a similarly quirky comedy similarly struggling in that spot. Sons & Daughters lost even more of its viewers — and its potential to build momentum — when it aired against the competition-crushing American Idol.

Still, ABC stood by its plan to air weekly back-to-back episodes before a pre-emption by The Ten Commandments this week. A not-particularly-upbeat Goss hasn't given up hope that his show will get another chance, and that the one unaired episode will eventually be seen. "I think what they're wanting to do is to figure out a time to rerun the episodes in the early summer, and then they'll probably tag it on there as sort of a bonus episode," he said, before saying that while the ratings don't justify a second season, ABC's support allows for a bit of optimism.

"It really has been a collaboration with ABC from the start," he said, explaining that the network's president of entertainment, Stephen McPherson, approached him and Holly with the idea for the show after seeing an example of their improvisational approach. "They asked us to do it. That's why they've been so great. People don't believe me when I say how great they've been. They just think I'm kissing their butt. But they really have, because they wanted to try something new."


"They never thought this would change the face of television, it's just a different way to make a show"

What's innovative, though not entirely unique, about the show is its use of improvisation to create naturalistic dialogue. "I wanted to do a show where we used improvisation more like an Altman approach, where we use improvisation as our creative process, but we don't necessarily need you to know that it's improvised," Goss said.

ABC made sure viewers did know, however, by beginning the show with a verbal and written message that the dialogue was partially improvised – a "warning" Goss wasn't fond of. "It either looks like an apology or bragging," he laughed.

So what does it mean to be a writer on an improvised show? "Instead of just being this raw improv from the actors, its more like we're all writing it on the fly, both in front of the camera and behind it," Goss said.

"There's no jokes in the script. There's no dialogue in the script. What we'll do is we'll write the basic story first, so everything makes sense and we know what the drive is. Then we go through and we start to analyse what can you possibly do to get comedy out of this," he explained. "Then we'll do another pass where we go through and say 'let's work in a couple of good physical bits.'"

The actors are presented with a thorough description of what each scene is supposed to achieve. "How they go about it and the words they use to do it are up to them, for the most part," Goss said. "We'll get halfway through shooting and we'll let the actors do their thing at first. And then if we're not quite there yet, we'll start to mould it from behind the camera and say 'why don't you try saying this' or literally 'I need you to say this' because that's going to be the line that takes us to the next scene."

The process results in a lot of footage – between 12 and 14 hours for each 22-minute show. "It becomes like a puzzle, where the pieces change depending on who's putting them together, because there's no one way to put an episode together," he said. "There are multiple ways to do it. There's a lot of bad ways and there's a few good ways."

Goss, who is also an editor, would work with the show's editors or assemble some scenes himself. "It's a two-week process where it slowly starts to come together the way you picture it in your head," he added.

The use of improv, the extended family focus, and a viewer-as-fly-on-the-wall sensibility lend themselves to the easy – and lazy – way to write a review: "It's like Arrested Development meets Curb Your Enthusiasm and they go have drinks with The Office." Except while it may have shades of all of those shows, it really emulates none of them, and the comparisons may have hurt more than helped.

Audiences tuning in looking for a sitcom filled with joke after setup would instead find a show that touched the heart as much as the funny bone. Goss pointed to ABC's Emmy-winning success with half-hour dramedy The Wonder Years, which ended its run in 1993, but the form's relative rarity on network TV has perhaps contributed to its struggle. Half-hour non-sitcoms often clash with audience expectations after they see promos highlighting the comedy and ignoring the drama, and with networks' expectations for ratings.

Whether the show returns or not, Goss said NBC Universal, the studio that produces Sons & Daughters, is eager to put out a DVD, likely this summer. "There's so many great things we couldn’t put in because of network standards. Even things that aren't dirty, but alternate takes that were just as good as what we used, but you have to choose one."

If you want to show ABC your support for the show, write them at:

Oh, and watch it if it returns.

For more on my conversation with Fred Goss, check out the full Q&A.