Audiobook Review: Field Notes from a Catastrophe by Elizabeth Kolbert 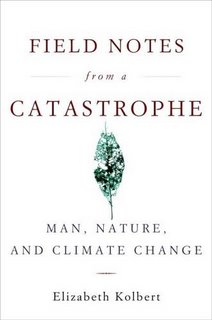 Elizabeth Kolbert's book Field Notes From a Catastrophe: Man, Nature and Climate Change originated in a series of articles for New Yorker magazine, for which she received the American Association for the Advancement of Science's magazine writing award.

With a clear, personable style, it's as entertaining as possible given the deeply disturbing conclusion: "It may seem impossible to imagine that a technologically advanced society could choose, in essence, to destroy itself, but that is what we are now in the process of doing." That she comes to this conclusion through no specific predictions of catastrophe - she's not making The Day After Tomorrow claims - but rather with devastatingly convincing proof that is widely accepted in the scientific community, makes an even more powerful statement.

The unabridged audiobook, read by Hope Davis (The Matador, American Splendour), is refreshingly non-alarmist in tone while still being alarming in message. Kolbert, who was a science reporter with The New York Times before becoming a staff writer at the New Yorker, presents facts calmly and rationally, acknowledging gaps in our knowledge about climate change, but also clearly demonstrating that those gaps do not challenge the basic principal that carbon dioxide levels are rising, man is a huge contributor to those levels, the climate is changing because of it, and those changes have detrimental effects to species who cannot adapt to them.

In the introduction, read by the author, she talks about Hurricane Katrina, which had struck shortly before the book was published. There had been speculation in the media about whether Katrina and Rita, another Category 5 hurricane that hit immediately afterwards, could be linked to global warming. Kolbert writes that while increased intensity of hurricanes is a symptom of climate change, no one hurricane can be blamed on the phenomenon. That even-handedness, combined with the dire underlying message, sets the tone for the book.

She gives practical examples of what global warming means, not just in abstract terms of the world we're leaving for our descendants, but changes that are affecting people, animals, and the earth today. Two scientists she interviewed were the first to present evidence of genetic changes occurring as an adaptation to global warming, in a mosquito. More compelling is the social adaptation residents of Shishmaref, Alaska may be forced to make, to relocate their community because rising ocean levels threaten to engulf their island home, or people in Fairbanks, when permafrost started to melt and destroyed homes built on top of it. The greater fear is that we will reach a threshold where the gradual climate changes will give way to more sudden consequences.

Kolbert attended a symposium gathering 300 scientists, and went into the field with researchers in Alaska, Greenland, Iceland, and many other points. She always puts a human face on the scientists she encounters, with charming physical descriptions and biographical details. Through it all, she found no significant dissent to the climate change theory, other than in details. She did find reports denying the impact of increased greenhouse gases on our environment funded by the petroleum industry, or utility companies, for example.

She laments that the public are not aware that there is consensus on climate change, having been led by some media, by industries with an interest in avoiding emission controls, and even by their own governments to believe there is significant dissent in the scientific community. In opposition to this view, she cites a study of peer-reviewed journal articles on climate change - over 900 articles between 1993 and 2003. Of these, 75 percent supported the position that emissions caused by humans "were responsible for at least some of the observed warming of the past 50 years. The remaining 25 percent, which dealt with questions of methodology or climate history, took no position on current conditions. Not a single article disputed the premise."

The book has a remarkably unbiased tone despite Kolbert's obvious point of view. The final chapter, where she talks about the Bush administration's response to the Kyoto Protocol, is the most she editorializes, and even then, it's hard to argue with her conclusions when she presents quotes to demonstrate the baffling lack of content in the Bush administration's arguments against Kyoto and similar efforts to curb carbon dioxide emissions, and for their own vague plans.

She points out that while American scientists have been the major contributors to our knowledge that human activity is contributing to global warming, the American government has been the major stumbling block in achieving any meaningful action towards mitigating the harm. She highlights cases where the administration altered reports by their own scientists to downplay the dangers of climate change. Even in this chapter, she explores the limitations of Kyoto and other agreements, but she makes convincing arguments against the United States' objections.

Unfortunately it's difficult not to come away with a sense of futility after listening to Field Notes. The hope must be that this book and other sources of knowledge about the issue will eventually provoke the public to spur governments into action. But there is no simple solution to reducing the levels of greenhouse gases, even if the political will existed. She profiles the town of Burlington, Vermont, which enacted several successful strategies but has still seen its levels of carbon dioxide emissions rise - though more slowly than they otherwise would have. She presents information by various scientists about the complex, multiple ways the problem must be addressed. She demonstrates that without the United States and China's cooperation, the rest of the world has little hope of making much of dent.

Still, Kobler brings the voice of science to a broader audience, who at least can be armed with facts against some of the political spin surrounding the issue, and at best can be motivated to act.

Field Notes From a Catastrophe: Man, Nature and Climate Change is available unabridged on five compact discs, including one enhanced CD with supplementary illustrations in an 8MB PDF, or as an eAudio download from Simon and Schuster's audiobook website, SimonSays, where you can also hear a clip and listen to a podcast about the book.
Posted by Diane Kristine Wild at 1:04 a.m.