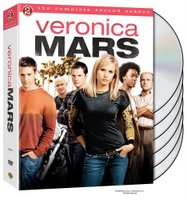 If community websites like Television Without Pity (TWoP) were a cross-section of the average TV audience, UPN's Veronica Mars would be a top-rated show and CBS's CSI would be languishing in the Nielsen ratings. Instead, Veronica Mars brings in fewer than 3 million viewers a week, and was renewed by the skin of its teeth on the new CW network. Still, higher-rated shows such as Everwood didn't make the transition.

If the availability of interactive online extras were a sign of popularity, NBC's struggling Scrubs would be a mammoth hit and FOX's surging House would be suffering at the hands of its network. Still, Scrubs is heading into its sixth season thanks to what they loving call their Internet "nerds."

"Luckily our fans are so loyal, that same core group has followed us from timeslot to timeslot and from evening to evening and really helped to keep the show going," said creator Bill Lawrence, who believes that's the recipe for survival for shows that aren't lucky enough to capture a giant audience at the outset.

There are other forces at work, including economics, scheduling, critical acclaim, and demographics. But Internet-organized fans are the vocal cult in "cult hit," who resurrected Family Guy and kept buzz-worthy Arrested Development on the air for longer than the ratings would suggest.

It's a basic tenet of marketing that you don't try to snare everyone in your publicity -- you study the people who area already using your product and target more of the same. If your clients are, on average, one-eyed men with college educations, you look for ways to advertise to other one-eyed men, other men with college educations. Using principles of customer engagement to create a passionate fanbase, if your audience congregates on the Internet, you join them there.

So what do smart insiders like Veronica Mars creator Rob Thomas do? He posts occasionally on TWoP, making that the place the cool kids hang out, the show the cool kids watch. Scrubs' Lawrence and his cast and crew come up with innovative Internet strategies to please their online fans. And at the recent upfront presentations, where advertisers get their first look at networks' fall schedules, NBC's TV chief Jeff Zucker has mandated that all his network's shows must have an interactive component.

With television losing viewers to the web and gaming worlds, networks are scrambling to put their content online, on iPods, on cell phones. NBC and their competitors have already begun to embrace the multi-platform world they've found themselves in. NBC's The Office, among other shows, saw its ratings rise after its availability on iTunes, and will take advantage of that fact by airing online-only "webisodes" this summer. CBS recently launched a broadband channel that will replay network shows and offer original content. ABC implemented blogs and streaming of some of its programs this past season, and its show Lost has employed perhaps the most aggressive strategy, creating an off-network world that treats dedicated viewers to clue-rich websites and, next year, even a video game.

But Zucker's announcement, which also mentioned the creation of several broadband channels, is part of an articulated strategy called Television 360, designed to engage viewers and create more opportunities to sell space to companies who have seen audience fragmentation and TiVo and other technologies reduce the effectiveness of their on-air ads.

"No broadcaster wants to leave on the table their share of the extra revenue — $270 million this year as estimated by the trade magazine Television Week — that will come from ads on non-traditional platforms packaged into upfront deals."

Another marketing truism is that it is far less expensive to retain current customers than to recruit new ones. The goal of online tie-ins, then, is not just to hook more fans, but to keep the fans you already have hooked. No amount of podcasts, chat rooms, videos, and quizzes is going to create a robust online community for a show that has no Internet buzz to begin with. But smart networks and smart shows have begun to feed nascent or existing communities hungry for that content, and in doing so, to create online ambassadors to spread the word, online and off.

Emotional engagement can keep TV shows riding high even when quality dips. Desperate Housewives' ratings remained strong this year despite slipping in critical and audience buzz. Audiences who are invested in the characters and story can be fiercely reluctant to give up on a show they've already engaged with. Networks are beginning to wake up to the fact that they can create even more investment, apart from that on-air hour a week, by tying it into their audience's online lives and making the computer, the cell phone, the iPod an extension of the TV network.
Posted by Diane Kristine Wild at 3:23 p.m.