Audiobook Review: The Hidden Messages in Water by Masaru Emoto 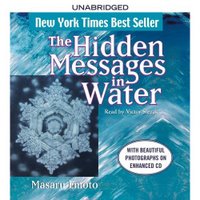 Masaru Emoto's The Hidden Messages in Water posits the theory that water exposed to positive thoughts and words forms beautiful crystals, while exposure to negative thoughts forms distorted and ugly crystals. If you can hear that premise without rolling your eyes, you're more the audience for this attempt at new age inspiration than I am. Listening to this audiobook, my eyes were in dagger of rolling out of my head - unpleasant at the best of times, but dangerous when I was listening while driving.

I'm baffled at how some people can be skeptical about science and the scientific method, yet not at all skeptical about the unproven and often unprovable theories of pseudoscientific research such as Emoto's. He is careful to outline his experiments in scientific terms - even bringing a hazy understanding of quantum physics into it - while skirting any description that would allow for duplication of his findings or any confidence that other variables contributed to them.

The basic method of his experiments was to direct words, either written or spoken, to a sample of water, freeze it, then take high-speed photographs of the resulting crystals. He finds that "love" and "gratitude" form perfect crystals, while defective crystals are formed on exposure to phrases such as "you fool" and "just do it" (Nike might be surprised to have that classified as a negative). Ignoring crystals altogether was also bad. From this, he takes the fairly admirable view that we should use these same principals to guide how we treat people, though I don't think it's necessary to consider that people are made up largely of water for us to want to treat others with love and gratitude more than insults.

He also played various types of music for the water, finding that classical music resulted in beautiful crystals, and heavy metal created ugly ones. Guess what kind of music Emoto prefers?

The Hidden Messages in Water is one of a few such books by Masaru Emoto which were initially self-published in his native Japan, never peer-reviewed in academic journals, and gained some popularity from exposure in the movie What the #$*! Do We (K)now!?. He ignores double-blind procedures that might reduce the skepticism that the photographer could simply choose a crystal that best demonstrates the result he expects to find. His claims are the subject of one of the James Randi Educational Foundation's million-dollar challenges - that skeptics' organization has an as-yet-unaccepted standing offer to pay him $1 million if he can demonstrate his findings using scientific methods.

Emoto's sloppy pseudoscience shines throughout the book, most amusingly when he asserts that he believes there are 108 elements in the periodic table, because that corresponds to the number of earthly human desires described in Buddhism. Scientists currently claim the existence of 116 elements, 94 of them naturally occurring on Earth, but Emoto, a businessman who obtained certification as a doctor of alternative medicine, doesn't often let facts get in his way.

"Many of the photos are quite nice," says retired chemist Stephen Lower on his website, "but the shapes of ice crystals are highly dependent on the conditions and rates of freezing, so Emoto's fanciful interpretations have no scientific validity."

The crystal pictures that accompany the audiobook are undeniably beautiful (even some of the ones he describes negatively), but his descriptions of them range from highly subjective interpretations to downright incorrect facts. After claiming that major cities' water supplies don't form proper crystals, he cites my city of Vancouver as an exception. "The water from Vancouver produced relatively complete crystals, perhaps because of the bountiful supply of water in the Rocky Mountains," reads the description following a lovely crystal picture. If Vancouver didn't lie 500 miles away from the Rocky Mountains, he might have more luck sounding credible.

Most damning to Emoto's credibility, he talks about the healing properties of water - particularly the special healing water he sells on his website, of course.

There is a positive, important message in The Hidden Messages in Water which is nearly buried under the ridiculous claims of water's alien origins and supernatural powers. Emoto's point is that since humans are composed of water, and depend on the Earth's water supply for life, we must value that source of life more than we currently do. His anti-pollution, pro-conservation stand is laudable, even if his fanciful theories aren't.

The Hidden Messages in Water is available unabridged on three compact discs, including an enhanced CD with 65 pages of water crystal pictures. For more information, visit Simon and Schuster's audiobook website, SimonSays, where you can also hear a clip and listen to a podcast about the book.
Posted by Diane Kristine Wild at 7:08 p.m.