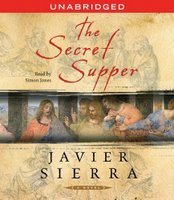 The reading public seems to have a huge appetite now for religious conspiracy thrillers, and while it's a genre that leaves me cold, The Secret Supper by Javier Sierra is at least a convincing examination of the hidden messages in Leonardo Da Vinci's The Last Supper.

Set in the late 1400s, in the time of Leonardo himself, the book was translated from the original Spanish and is read by Simon Jones, whose theatrical, plummy tones add some drama to a story that often gets bogged down in bland characterizations and digressions from the central plot.

Our hero is a peculiar but interesting feature of the book, though he's never quite given enough personality to spark much curiosity. Sierra has cleverly created a protagonist who is kind, intelligent, but difficult to root for. His quest must succeed for the mystery of the book to be resolved, but his quest is to suppress artistic expression and impose conformity to religious dogma. Father Agostino Leyre is an Inquisitor, a monk charged with suppressing heresy in the time of Pope Alexander VI , come to the monastery of Santa Maria delle Grazie in Milan to investigate Leonardo and his painting for being part of a heretical movement.

It's difficult to listen to The Secret Supper, or even hear its premise, without thinking of that other popular book abut Leonardo. The Da Vinci Code by Dan Brown preceded Sierra's, but they are not very similar in tone or style. Sierra's is less breathlessly driven by intrigue, more academic. It's meticulous in its examination of one of Leonardo's masterpieces, and the artist himself is a character in the book - an imposing figure physically, and spoken of in awe-struck admiration, but never really popping off the page as a developed character.

The loose plotting means that other attempts to inject mystery tend to fall flat. There's a murder at the beginning, of a character who drops in just for that purpose, and which isn't mentioned again until long after I'd forgotten about it. The mysterious figure who kick starts the plot, the Soothsayer, disappears from the action for long periods of time and the code he provides that Leyre must decipher is just one of a confusing array of clues that lead to the ultimate, rather anti-climactic resolution.

As a non-Catholic, I felt I needed to read a history of Catholicism and heretical movements in the Middle Ages to fully appreciate the book. But more importantly, without a copy of the painting in question in front of me, or some of the other visual elements described in the book, the revelations were not as revelatory as they otherwise might have been. The cover of the audiobook does have a detail from the painting, but omits many of the relevant portions. I don't know if the book edition is illustrated, but not including an enhanced CD with supplementary illustrations seems like a missed opportunity. (Though since I listen to audiobooks while driving, I suppose it's just as well I wasn't trying to pore over illustrations at the same time).

The Secret Supper is available unabridged on eight compact discs, as an ebook or a digital audio file, or in an abridged version on compact disc. For more information, visit Simon and Schuster's audiobook website, SimonSays, where you can also hear a clip and listen to a podcast about the book.
Posted by Diane Kristine Wild at 12:07 p.m.